Who can be trusted to provide services respecting women’s human rights?

When it comes to maternity care, it seems service providers just can’t get it right 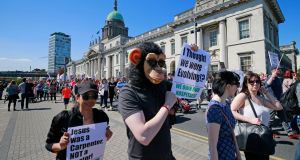 Did anyone at the Department of Health anticipate the public outrage that ensued when it was announced that the Sisters of Charity were going to own the new National Maternity Hospital (NMH)?

Some media commentators have likened the mess to that made of Dr Noel Browne’s Mother and Child Scheme in the early 1950s. The chief medical adviser to the government at the time, Dr James Deeny, said “because of bloody-mindedness, folly, idiocy, scheming and religious obscurancy . . . they made a right mess of the Mother and Child Scheme”.

1 One hundred Irish retailers for all your online Christmas shopping
2 Covid-19: Pressure over breakdown in tracing system intensifies as State enters Level 5
3 How long can Government afford to keep State pension age at 66?
4 Miriam Lord: All test and no trace makes Jack, and heaven knows who else, a very ill boy
5 Gym owner plans to defy restrictions and open
6 Nearly 400 Brazilians have tested positive for Covid-19 in Ireland, data shows
7 Des Bishop apologises to Traveller community for comments in interview
8 Suzanne Lynch’s US Election Diary: Trump ‘walks out’ of TV interview at White House
9 A further three deaths and 1,167 new Covid-19 cases reported in the Republic
10 Golf clubs must close under Level 5 Covid-19 restrictions
11 Family settle case over death in hospital of 23-year-old woman
12 European Union is the new ‘big beast’ on the bond markets
13 What I learned about male desire in a sex-doll factory
14 US election: Trump voters are energised in North Carolina but the state is on a knife-edge
15 Brexit: UK government suffers heavy defeat over ‘law-breaking’ Bill in House of Lords
16 Varadkar says ‘dumping’ contact tracing problem on GPs ‘unfair’
17 Covid-19 restrictions in Europe: how does Ireland compare?
18 Coronavirus still ‘untreatable’ for some elderly nursing home residents
19 Shock at golf clubs as sport faces shutdown in Level 5
20 Pope must follow through on support for same-sex civil unions, says McAleese
21 Life under Level 5: What will the next six weeks look like for the State?
22 ‘My sister preys on people’s weaknesses, and causes nothing but trouble’
23 Newton Emerson: The Border is not the reason there cannot be a zero-Covid policy
24 Six Nations - Ireland v Italy: Kick-off time, TV details, team news, standings and more
25 Stevie Nicks: ‘If I had not had that abortion, there would have been no Fleetwood Mac’
26 Sligo hospital apologises over ‘shortcomings in clinical judgment’
27 Covid-19: State moves to Level 5 for six weeks with hopes of ‘meaningful’ Christmas celebrations
28 Bruce Springsteen quiz: How well do you know The Boss?
29 Declan Ganley denies Donald Trump trying to swing lucrative 5G contract for Rivada
30 Top gadgets to help make your home safer this winter
31 These lemon cheesecake bars are a little slice of sunshine
32 Marquees and fleets of delivery vans: how supermarkets are ready for Lockdown 2
33 Ireland will defend long unbeaten record against England
34 Brexit: UK and EU agree to intensify talks in rush for deal
35 Pontifacts: All the papal questions you never thought to ask
36 Call for financial support for west Kerry if Fungie does not return
37 Spit not yet polished for coronavirus testing
38 How Nicaragua is becoming a renewable energy paradise
39 Miriam Lord: Dáil reeks of alcohol but Irish politics will not be sanitised
40 Asylum seekers’ wait time before working cut to six months
Real news has value SUBSCRIBE