Heading over for my fourth London marathon next weekend, I realise that I’m slightly hooked on the races 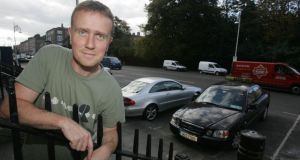 Emmet Malone at the start line of The Dublin City Marathon on Fitzwilliam Square in Dublin. Photograph: Aidan Crawley 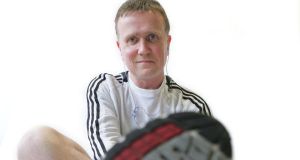 I ran my first marathon in 2007, partly because a far less likely runner than myself had announced, late into a long night in a city centre bar, that he was about to start training for one, prompting me to think: “Well, if he can, I can.” So I’m as surprised as ever to be heading off to London to do my fourth this weekend.

Dublin that first year went well enough, my second outing a year or two later less so due to a heady mix of over-confidence and under-training.

The third, for which I trained fairly hard (by my standards), with a club (Crusaders), produced comfortably my best time to date, around three hours 30 minutes, after which I realised that while I could probably go a bit faster, I really wasn’t up for the effort required.

Still, I came to realise I was slightly hooked on the races or, more precisely I suppose, the focus they provided to my preferred running regime which largely consists of long, slow solo outings combined with the odd trail run with friends.

If beating previous personal bests was no longer going to be the motivation then treating the races as “experiences” seemed a decent way forward.

My first was supposed to be New York, a race I had started trying to enter several years previously. Under the old entry rules I got in automatically at the fourth attempt but then had to defer my entry because of work commitments, after which it deferred on me due to a major hurricane.

I’m now down to run it next year by which time I’ll have paid more than $1,000 (€726) in entry fees alone (a figure dwarfed by the spend on what turned out to be a natural disaster-themed family holiday).

Among the many lessons learned on that trip was that carting the entire family away with you 10 days in advance of your marathon is unlikely to make for ideal preparation.

I didn’t run once in that pancake and French fry fest and put on half a stone. The only upside was that I had such a bad IT band injury (under-training was definitely a factor again) that the race being cancelled almost certainly spared me what would have been a desperately painful last 16 miles.


Focus on London
So, with my troubled relationship with the Big Apple parked for the present I turned my attention to London.

I’d never previously fancied it on the basis that it seemed like the worst of both worlds – the hassle of travel but to a city I’m very, very familiar with – but then I was asked to cover last year’s event for this newspaper and was slightly blown away by the buzz around the whole thing.

The atmosphere around the start-up in Greenwich – easily accessible for a 10am start – was terrific. In New York you have to get up at something like 5am and embark on a long journey followed by what sound like a fairly miserable wait to run.

At Tower Bridge, where the press centre is located, the crowd seemed to be almost 10 deep in places and the backdrop made almost every aspect of the race look impressive.

Chastened by my previous experience and incapable of running an actual qualifying time (my best would get me in handily if only I were in my 60s), I emailed the press office back before Christmas.

At first they failed to respond and during the weeks that followed I continued along as usual, playing a bit of football and resolving to run a great deal more than I tended to after waking up and seeing the weather outside.

Then, one night in late January, I was surprised to get an email congratulating me on my successful Virgin London entry. By that stage, it didn’t seem entirely the right tone to adopt.

I was kind of chuffed but anxious too that the whole thing would turn into another disaster but having sought and received a fair bit of advice, I threw myself hell for leather into a training programme that has, more than once, felt like it might kill me and, more generally, has left me thoroughly knackered.

Things were compounded early on by the weather.

A morning in early February on Sandymount strand stands out, with me gasping for breath and barely moving, as I headed into a wild headwind while being watched silently by somebody (man or woman, I couldn’t tell they appeared to have so many layers on) pretty much cowering behind some structure or other.

To be perfectly honest, I enjoyed almost every run but dreaded quite a few and the feeling that I had so little scope to skip or miss any weighed heavily on my shoulders at times, especially when it meant getting up at 6am because it was the only way I was going to get out that day. I am not an early morning person.


Back injury
Things were still disrupted, though, by a back injury sustained in a bad fall during a football game I clearly shouldn’t have been playing (like the cliched cop in all those American shows . . . it was to be my very last day).

It kept me out for only a week in the end but I can still feel it on longer runs, including a recent longish mountain race that wiped me out in a way that I was not at all expecting.

Two weeks on from that, I am, I suppose, as ready as I’m going to be. I have done enough miles to be confident of getting around alright but have been cured of my briefly held delusion that I might somehow beat my previous best time. I’d settle for a respectable one now and doing it comfortably enough to genuinely enjoy the experience.

First and foremost, though, I’ll just settle for it happening.

There are still five days to go: plenty of time for plague or pestilence to strike the English southeast.

* Emmet Malone will be running the Virgin Money London Marathon on April 13th next.

‘It was like somebody put a furnace in my core’: Michelle Obama on menopause
3

What is the going rate for a home in . . . Co Clare?
Real news has value SUBSCRIBE