Tackling her own Everest 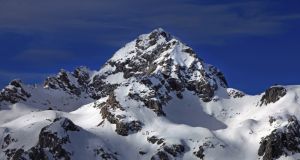 TEENA GATES went from a happy, healthy child to energetic, fun-loving adult. But somewhere along the line, she allowed her small frame to become distorted and almost destroyed by the very substance which keeps us alive – food.

The 98fm radio journalist is a petite 5ft 2in who has always loved horse riding, snorkelling and generally keeping active. But a fall from a horse more than a decade ago saw her turn her back on exercise and, due to chronic back pain, seek solace in comfort eating.

Before long, she had ballooned to 23 stone and was informed by a doctor she needed surgery on her gall bladder but she was too heavy to be operated upon.

This spurred her into action and in the space of 12 months, she lost an astonishing 12 stone and scaled mountains, both metaphorically and in reality. She has chronicled this in a book entitled O ne Foot In Front of the Other.

“I was never a skinny child, but I have always been fit and active,” says Gates, who is in her mid 40s. “I never saw myself as an athlete but took my fitness for granted – I was always on the go, both at work and during my leisure time – it was just part of my make up.

“But about 12 years ago, I had an accident while horse riding and was in a lot of pain – I had extensive bruising and, although my X-rays came back clear, I found it very difficult to move and my back was always sore.

“I continued to eat what I normally did, but because I wasn’t moving, I didn’t burn anything up. So about four months after the accident, I looked in the mirror and I didn’t like what I saw – I had changed shape, but rather than do something positive about it, I comforted myself with junk food.

“As time wore on, I got bigger and bigger and even though I hated it, I found it almost impossible to change,” she admits. “I weighed as much as two people, I broke chairs on more than one occasion and even broke a sofa.

“ I was always terrified of going places as I never knew if I would be able to fit into a seat or even if it would hold my weight – it was horrendous, but I didn’t have the motivation to make the effort to become healthier.

“But then I was given an ultimatum – I had been suffering with cramps and terrible nausea and was diagnosed with an infected gall bladder.

“The consultant told me I needed to have an operation to remove it but because I was too fat, it would be impossible for him to perform surgery.”

She had the motivation she needed:fear. And after spending a week in France on her own, Gates returned ready for action.

“I joined Weight Watchers and my local gym, where trainer David Dunne encouraged me to keep focused and just concentrate on one step at a time.

“On my first session, I could only manage one minute on the treadmill, but he never made me feel like I was a hopeless case, and each time I returned, I could do a little more.

“One of the nutritionists I met while I was at the hospital encouraged me to plan my meals in advance and I was able to arm myself with the right foods whenever I felt hungry. The weight was very slow to disappear in the beginning, but I tried to concentrate on becoming healthy rather than thin.

“And because I wasn’t beating myself up or starving myself, it suddenly all fell into place and I began losing weight.”

Within five months, Gates had lost four stone and was ready for the surgery which would help her even further along the road to recovery.

“The surgery was a success and I suppose I continued losing weight because of the support I had been receiving from my Facebook friends.

“They all offered so much encouragement – when I got to the halfway mark and had six stone left to lose, I posted a message saying I felt I still had a mountain to climb.

“Shortly after that, I got a message from a woman called Rosaleen Thomas who said if I really wanted to experience climbing a mountain, would I consider climbing to base camp Mount Everest in aid of the Hope Foundation?”

Over the weeks and months that followed, Gates continued to lose weight and train hard. She would be climbing with a group of Irish people, including renowned adventurer Pat Falvey.

And on October 9th, 2010 after many gruelling days of trekking, she and her fellow climbers reached Base Camp. Two days later, she went a step further – well 20,300 ft higher to be precise and climbed to the icy summit of Island Peak in the Himalayas.

“I literally climbed so many mountains to get where I am today,” she says. “I was 23 stone and couldn’t have imagined that I could turn my life around.

“So I would say to anyone else who is facing a similar challenge, don’t look at the whole picture as no-one can take on a huge task like that in one mental leap – take one step at a time and put one foot in front of the other, and believe me, you will get there in the end.”

One Foot in Front of the Otheris published by Gill and Macmillan, €14.99