Facilities here need to race to catch up, but in Shannon McCurley we still have one track cycling competitor to cheer on at the Rio Olympics 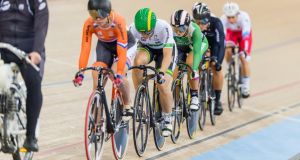 Shannon McCurley, in the green cycling gear, at the UCI Track Cycling World Championships 2016 in London

When Martyn Irvine became the world scratch race champion in 2013, ending a 117-year wait since Harry Reynolds last took gold, many were stunned that Ireland didn’t have a proper velodrome.

Track cycling takes place on these banked tracks, with covered structures and wooden boards being the norm in many countries. Ireland is different: this country has outdoor tracks in Dublin, Belfast and Kanturk, but these lack the usual smooth surface and the roof and sides necessary to fend off wind and rain and to guarantee speed.

Because of this, the country’s best riders have been forced to spend long periods training in Majorca, while, at the domestic level, competitors have had to make do with less than ideal conditions.

That may all be set to change, however. In March 2015, Fingal County Council granted planning permission for an indoor velodrome that would be part of the National Sports Campus in Abbotstown. Cycling Ireland was later given the go-ahead to put the project out to tender.

Speaking to The Irish Times recently, Cycling Ireland chief executive Geoff Liffey said that five companies had applied and that this is currently being whittled down to a preferred bidder. When this has been done, Cycling Ireland will seek capital approval from government.

It is estimated that the project will cost €8 million, with the facility to be shared by Badminton Ireland, which will have a number of courts in the infield.

“This is the most advanced project we have had,” he said. “There is a lot of support for the sports campus site. The indoor arena is done, and the velodrome would be the next piece to be ready. I would be confident it will be done. It is just a question of when.”

Once the indoor track is in place, he feels it will be a significant boost for Irish cycling. Being able to train indoors, away from the elements and traffic, would be of benefit to riders of all ages. There would be a significant boost to the grassroots, and riders would have a better chance of progressing to international level.

“It would be massively important. I can’t overstate the significance in terms of something that will energise the pipeline,” Liffey said. “We are reliant on overseas facilities, but we would be confident when it is here that it will benefit not just the performance people but also everyone else who can use it all year round. You only have to look at the success of other countries.”

Irvine’s scratch race gold medal and his silver in the individual pursuit in 2013 were achieved despite the country not having a velodrome. This achievement was partly due to his determination to succeed. It was also due to the funding and support Irish competitors have got in recent years from the Irish Sports Council and the Irish Institute of Sport.

The same support helped a number of riders push for qualification for the Rio Olympics later this year. Irvine was one of those, although a spate of injuries put paid to the success of his campaign and he was unable to get the results he needed. He recently retired, somewhat demoralised with the sport.

Ireland will, however, have a competitor in Rio. Shannon McCurley looks set to travel to the games and ride in the keirin, a high-speed race in which riders do several laps behind a motorbike before that peels off and a flat-out sprint to the finish line begins.

It will be the first time an Irish woman cyclist has qualified for an Olympic track event, and follows on from participation by David O’Loughlin in Beijing 2008 and by Irvine in London 2012.

“I’m over the moon about securing a place,” she said. “It’s a massive boost for not only myself but also Cycling Ireland. Hopefully, this can encourage more young females to turn to the sport, as there is Olympic potential.”

McCurley is frank about her preparation not being as smooth as she had hoped. She was hit by a car in a hit-and-run incident in November, which gave her a third concussion after two previous crashes on the track.

She also suffered appendicitis at the UCI Track Cycling World Cup in Hong Kong, later undergoing surgery just three weeks before the world championships. That operation hampered her preparation for the latter, but she believes that a good run at things between now and Rio should put her in strong shape.

However, she states that the 2020 Olympics are the real goal. She’ll be 28 then, and far more experienced. Liffey also believes that more Irish competitors will qualify for those later Olympics, with the women’s team pursuit squad and male riders such as Eoin Mullen getting stronger all the time.

McCurley has set an intermediate target in Rio.

“For me, realistically, a top 12 is my goal,” she says. “The Olympics is far harder than anything I’ve contested in the past, and I’m still new to keirin racing.

“In fact, I didn’t expect to qualify for Rio; Tokyo 2020 was always my goal, and being young and new to sprinting, it’s there that I’ll be definitely going in with medal potential. That’s the ultimate goal: Olympic gold.”

By then, Ireland will hopefully have a proper velodrome in place and the beginnings of what will be a more sustained push towards building a strong – and successful – culture of track cycling.

Lockdown living: ‘We’ve moved into a cabin so the kids can have the house’
9