Sex survey: Men happier with their bodies than women

What you told us about your body image, ability to orgasm, and erectile dysfunction 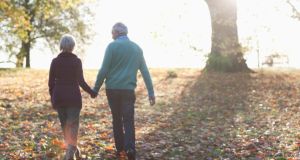 Body confidence: women grow happier with their bodies as they get older, with 59 per cent of women aged 50-64 feeling happy. Photograph: Getty Images

Men are happier with their body image than women are, and the older men get the more pleased with themselves they are, according to our survey. Seventy per cent of men aged 50-64 are happy with their bodies, compared with just 46 per cent of women aged 17-24.

“This probably points to the impact on women’s body confidence of the widespread use of unrealistically perfect female figures in the media. Men are not exposed to quite as much unrealistic comparison,” says psychotherapist Brendan Madden.

Women grow happier with their bodies as they get older, with 59 per cent of women aged 50-64 feeling happy.

“This is well known: many women focus on their own bodies and its deficiencies during sex. It is good to know that age has some benefits and women become happier with their bodies,” says psychotherapist and Irish Times columnist Trish Murphy. But it doesn’t necessarily mean that feeling more confident will lead to better sex.

Does your partner always orgasm during sex? Nineteen per cent of men in relationships believe so, compared with nearly twice as many women (37 per cent of women) who believe the same. So while it’s difficult to draw definitive conclusions, orgasming during sex, for most people, doesn’t always happen.

And it seems to be a problem for twice as many women.

More women than men say they would talk to their partner about a lack of orgasm.

“There’s talk, and there’s talking,” says sexologist Emily Power Smith. “Are they talking about this in a way that will help next time, or are they blaming themselves or each other? Many people make their partner’s orgasm about themselves. It’s an ego thing. Putting pressure on a woman to orgasm is the surest way to knock her out of the orgasm field, whether the pressure comes from within or without.”

An inability to orgasm affected 43 per cent of women aged 35-49 and 51 per cent in the 17-24 age category, which would seem to show that younger women are either less experienced or more inhibited.

“Some women experience this difficulty from time to time and it is related to tiredness, distraction, not being sufficiently aroused or not giving themselves enough time.

“ It can also be a result of difficulties within the relationship and can indicate communication problems.”

“Both partners will often label her as having low desire because it is easier than actually talking about why her desire is low. There is no physiological reason for a woman’s libido to diminish over time in a way that should preclude sexual activity . . . Men will often expect their female partner to be able to enjoy the same kind of sex they’ve always had, through her lifetime.

“This is just not possible. As with men, women need more stimulation and time to become aroused [as they] age.”

Erectile dysfunction (ED) affects between 25 and 28 per cent of 17- to 49-year-olds in the survey. However, this increased dramatically for the over-50s, with 38 per cent of 50- to 64-year-old men and 55 per cent of men over 65 reporting that they had experienced ED.

“This indicates that ED is much more common than most men realise and should be reassuring to men who experience it from time to time,” says Madden.

Murphy adds that “it would be wonderful to see this stat broadcast so that those who experience sexual dysfunction don’t see themselves as different or abnormal.”

Bergin comments: “The public may be surprised that the experience of erectile dysfunction is as common in the younger group as that of the somewhat older group. This is becoming a more common experience for young men: probably more common than these figures indicate, as men tend to discuss this issue only with a doctor or in a therapeutic setting and rarely if ever talk about it with their peers.”