A national athletic hero, Sonia O’Sullivan’s career has had plenty of heartaches, as well as triumphs 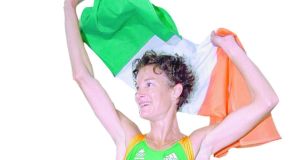 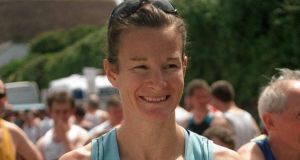 Sonia O’Sullivan before the Nike/Ballycotton ‘10’ in Ballycotton, Co Cork, in 2001. Photograph: Ronnie McGarry/Sportsfile 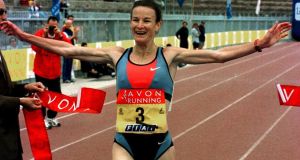 For those of us of a certain age, drawn to moments of high sporting drama, there was one person who gave us more to shout about, more moments of nail-biting tension and, alas, more nights of gut-wrenching disappointment than anyone else.

Emotionally, we invested more in the rollercoaster of her fortunes than we did in those of Eamonn or Stephen or Seán or Pádraig. Maybe Roy came close, but then he had team-mates, and as many detractors as supporters.

Still instantly recognisable by her first name alone, Sonia O’Sullivan is probably the finest woman athlete Ireland has produced. An Olympic silver medallist, a world champion and twice a world cross-country champion, the gangly Cork woman with the devastating finishing kick was also no stranger to defeat. Twice, when fancied to win, she finished fourth in the Olympics and the World Championships, to the dismay of an expectant public at home.

The strong taint of suspicious drug use attaches itself to some of those who pushed the Irishwoman out of the medal positions on those far-off race days. Other Irish runners, such as Derval O’Rourke, have been awarded championship medals later after drug cheats were disqualified and placings changed.

Sonia is from an earlier era, before the technology was to test for drugs retrospectively, but she is relaxed about the issue. “I don’t dwell on it. So much time has gone by. It wouldn’t change anything if the placings were changed. You’d just get a medal in the post and put it in the drawer.”

She always knew there was something “not quite right” about some of her opponents, but nothing she could prove. “I think the drug-testing technology around the world has improved. There are fewer people cheating now. You can see it in the times and the performances; there’s no one doing ridiculous things, the way it used to be.”

Despite having been retired for about seven years, she remains a familiar face through her work in promoting running and healthy living, and commenting on athletics for RTÉ. When the Olympic flame passed through Ireland on its way to the London games in 2012, it was Sonia who was chosen to carry it into St Stephen’s Green and light the cauldron.

Injury, most notably a recurrent problem with her Achilles tendon, has forced her running to take a back seat in recent years but she still keeps active by walking, cycling and swimming.

“I reached such heights in running; you can’t match that as you get older. So you have to go to other events and set new goals. I get a great sense of achievement from cycling 160km in a day.”

British runner Jo Pavey’s recent 10,000-metre win in the European Championships at the age of 40 and only 11 months after having her second child captured the headlines, but Sonia was doing something similar back in the 1990s. She won her Olympic silver medal in 2000, just 15 months after giving birth to her first daughter, Ciara. There wasn’t any great plan at the time, she recalls. “I ran for as long as I could during the pregnancy, then switched in the last weeks to the bike.

“After the birth, I’d go for long walks, then after a few weeks, I started training again with the slowest group at first. The rate of improvement each week was amazing.”

Having children should be no bar to the maintenance of fitness, she believes. “Keeping up your fitness before and after a birth should be normal.

“The important thing is to find your right level, to be aware of what your body is telling you.”

Coping with injury is another challenge for runners that Sonia is only too painfully aware of these days. “It’s a lot easier to accept injury now than when I competed in the Olympics. I’m less likely to go to extremes to fix things than I was. I’m quite happy to jump on the bike, go for a long walk or hit the gym if I’m unable to run.”

“The great thing about running as part of a group is that there is a lot of energy in mass participation that drives the adrenalin in each person. People push themselves and, hopefully, are surprised by what they achieve.”

Sonia’s second daughter, Sophie, has taken up where her mother left off by making it to the state cross-country team in Australia, while Ciara has no interest in running. As a parent, Sonia says she wants her children to be happy whatever they do. “I wouldn’t have any expectations, and I would never put any pressure on them to do something. But it can be harder for them; they might think I have an expectation.

“Basically, I think if you find something you enjoy doing, you have to do it. Like I did.”