Second Opinion: Inequality, abuse and the cost of childcare preserve the marriage bar 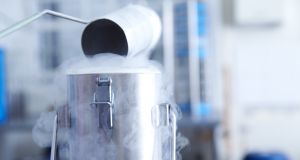 Society should be structured in such a way that women can easily combine children and a career. The egg-freezing stunt shows that their right to have children and a full-time job is just not taken seriously.

The offer made by Apple and Facebook to their female employees that the companies would contribute to the cost of “egg freezing” is a reminder that equality for women has not improved much in 50 years. The best and safest age to have a baby is between 19 and 29. Why would young women wait and put their health at risk? It is madness.

Society should be structured in such a way that women can easily combine children and a career. The egg-freezing stunt shows that their right to have children and a full-time job is just not taken seriously. Yes, according to the World Economic Forum’s Global Gender Gap Report 2014, women in Ireland are much less likely than men to die of heart disease, cancer, diabetes or respiratory diseases but women’s health, in general, still has a long way to go. Women have been harmed by the health system for many years.

Hundreds of wombs have been removed unnecessarily. Women’s pelvises have been broken and no one has been held to account.

Men have never been subjected to such degrading and abusive treatment. Even today, women are three times more likely than men to have medical procedures carried out on their reproductive organs for non-cancerous reasons. Are women much less healthy than men or is misogyny informing practice?

Maternal mortality rates are now about nine per 100,000 live births, compared with 120 in 1949. Women have paid a high price for these low rates and have little choice about where, when and how to give birth. Ireland’s interventionist childbirth model is bad for women’s health. They are routinely induced and given unnecessary episiotomies. Caesarean section rates are double those recommended by the World Health Organisation. This is not normal and is even abusive.

We were promised a new National Maternity Strategy before the end of this year and it is still not available. Former minister for health James Reilly also promised a maternity strategy in 2013 and that did not materialise either. More importantly, will any new strategy be based on the recommended midwife-led model? There is ample evidence that midwife-led care during pregnancy and birth is better than obstetrician-led care for the majority of women.

Violence and abuse affects women’s lives and health. Despite having a National Strategy on Domestic, Sexual and Gender-based Violence 2010-2014, the violence goes on unabated. The Women’s Aid Annual Report 2013 shows that nearly one-third of Irish women have experienced psychological violence by a current or ex-partner and 14 per cent have experienced physical violence.

In September, RTÉ’s Sean O’Rourke interviewed Mr Justice Barry White, who had just retired and who spoke about “degrees of rape”, “particular classes of rape”, and women “trying it on” to get more compensation. Explaining differences in sentencing, White said “the nature of rape can vary greatly; there are degrees of gravity”.

Journalist Susan McKay, who was on the programme the next day, tried to explain that “degrees of injury do not indicate the level of trauma that a person experiences” and that “additional injury is not the salient point”. Mr Justice White appears not to understand that rape is rape and other injuries are a separate crime.

Women are afraid to report rape and follow through to the courts because of the unhelpful attitudes that persist throughout the justice system.

In October the Joint Committee on Justice, Defence and Equality published a report about domestic and sexual violence. They want zero tolerance towards violence against women and want Ireland to sign the European Convention on preventing and combating violence against women and domestic violence. So far, 36 countries have signed up. Implementing the convention will provide women with the legal protection they deserve.

In spite of equality legislation, women’s childbearing role is not taken seriously enough. Childbearing is seen as a personal choice instead of a public good. And when it comes to childrearing you are on your own. The State is not interested in providing low-cost, quality childcare so that women can participate in work, politics, leisure and other activities at the same level as men. The Global Gender Gap Report ranks Ireland as 92nd out of 142 countries for women in parliament. Only 6 per cent of listed companies have female board members.

Women still do five hours of unpaid work every day compared with men’s two hours. Although the law that stopped married women working was abolished in 1973, the cost of childcare is, in effect, the new “marriage bar”. Full-time childcare for two children costs about the same as a medium-sized mortgage, or about €1,200 every month. Women in Ireland will never be equal until we have affordable childcare funded by the taxpayer.

Dr Jacky Jones is a former HSE regional manager of health promotion and a member of the Healthy Ireland council. drjackyjones@gmail.com To read the Gender Gap report, see weforum.org/issues/global-gender-gap