Pre-exposure prophylaxis medication is subject of debate within gay community 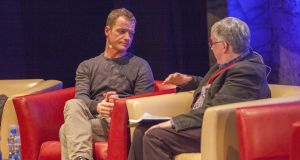 Rory O’Neill, aka Panti Bliss, said at the dotMED conference: ‘What is better? Protect people from getting a life-changing condition and one that is much more expensive to treat afterwards or give them preventative treatment?’

Self-confessed “accidental activist” Rory O’Neill, aka Panti Bliss, has said that people at risk of contracting HIV should be given pre-exposure prophylaxis (PrEP).

PrEP is the use of antiretroviral medication to prevent HIV infection in someone who has been exposed to the virus.

O’Neill, who was speaking at the dotMed conference in Dublin recently, said PrEP was currently the subject of debate in the gay community and his attitude was “if you have a vaccine for any other disease, you give it to the people who are at risk”.

While not currently available in Ireland, O’Neill explained that in other countries PrEP is given, for example, to people in sero discordant relationships, where one partner is HIV negative and the other HIV positive. “It has proven to be very effective and very safe but there is a resistance in some people to give it because they are afraid it is going to be a licence to give up condoms and all of that,” he said.

“What is better? Protect people from getting a life-changing condition and one that is much more expensive to treat afterwards or give them preventative treatment? It is an issue that is up for discussion but I think people who want it should be able to get it.”

In 2014 the World Health Organisation (WHO) recommended offering PrEP to men who have sex with men. Late last year, on the basis of further evidence of the effectiveness and acceptability of PrEP, the WHO broadened its recommendation to include all population groups at substantial risk of HIV infection.

According to the WHO: “PrEP should be an additional prevention choice in a comprehensive package of services that also includes HIV testing, counselling, male and female condoms, lubricants, ARV treatment for partners with HIV infection, voluntary medical male circumcision and harm- reduction interventions for people who use drugs.”

Speaking on being diagnosed as HIV positive in 1995, O’Neill said that thanks to the advances in treatment, the care of those living with HIV has moved from a time where initially doctors simply “managed death” to now where, as a patient, he said it has “no effect” on his life.

While O’Neill said that HIV doesn’t affect his life as a patient, there was still a lot of stigma and prejudice surrounding the condition. However, he added that he didn’t want people to be afraid of HIV because that fear can stop people getting tested.

He also paid credit to the staff and the care he has received from the Guide Clinic at St James’s Hospital in Dublin, and called for more resources to be given to the clinic, which provides the largest free HIV service in Ireland.