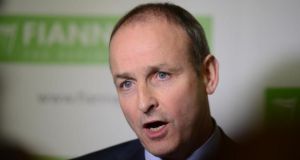 Fianna Fáil ministers have a knack of having their political careers defined by one moment or decision. For Donogh O’Malley it was free education. For Charlie McCreevy it was decentralisation. For Bertie Ahern it was the “dig-outs”. When Micheál Martin’s career draws to a close it will be remembered primarily for his decision to ban smoking in the workplace.

It could have torpedoed him politically. His record as minister for health had been patchy. The opposition had successfully (if inaccurately) painted him as a minister who preferred commissioning reports to taking decisions. But the smoking ban turned out to be his making, or at least the salvation of his career at the time. No political decision in a generation, outside the very specific circumstances of the fiscal and banking crisis, has been as radical.

And, given the forces ranged against it, the move required political courage to see through the 14 months from the announcement on January 30th, 2003, to the ban, on March 29th, 2004.

The ban may have helped Martin to emerge from the last, disastrous Fianna Fáil-led government if not unscathed then at least less damaged than his colleagues. It may also have been a factor in his being accepted as the leader of his party, enfeebled as it was.

Steering the ban through took considerable political nous. Martin was helped by the fact that two sets of Oireachtas committees had recommended such a ban, in 1999 and 2001. So, to a degree, there was cross-party consensus. Crucially, he also had the backing of the health sector and the trade unions that represented bar workers and restaurant staff.

Armed with research that showed passive smoking was carcinogenic, Martin could argue that the ban was a public-health imperative. Against that there were the vintners, the tobacco companies, the alcohol companies and the hospitality industry.

All were powerful lobby groups, some with perceived links to Fianna Fáil. Although some Fianna Fáil ministers looked for moderation or compromise, Martin was supported by Bertie Ahern, the taoiseach at the time (and a committed anti-smoker) and most of the Cabinet.

By the autumn of 2003 it was a political hot topic, and Martin was under pressure to tone down the plan. He appeared on The Late Late Show and at the Fianna Fáil ardfheis, and received huge support after both events.

The debate continued with quibbling about the ban’s effect on certain groups of people. On legal advice, narrow exceptions were made for hotel rooms, prisons, psychiatric hospitals and nursing homes.

When the ban came it was welcomed by politicians in the Dáil and Seanad. Sen Brendan Ryan of Labour, a constituency rival of Martin, summed it up well. “I am happier when his halo is a bit tarnished. It is not to my political advantage to have the halo reinstated. Nevertheless, the smoking ban was and is a good day’s work.”