Parkrun races are a runaway success

Parkruns are growing in popularity in Ireland, with four runs weekly around the country and more planned 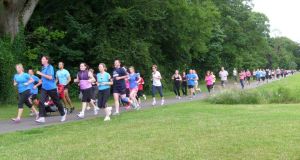 Sonia O’Sullivan has run a few over the years as have British Olympic champions Mo Farah and Alistair Brownlee. But a more representative sample of parkrun participants can be seen at one of the growing number of venues which host these 5k races on Saturday mornings.

In Marlay Park, south Dublin, on the day The Irish Times visits, times for the 5k vary, from about 17 minutes to 75. While the first man home, Christian Coleman, looks to be a pretty decent club runner, he’s no more the event’s target audience than Hazel Sharkey who pushes her kids, Oisín and Orla, around the course in a buggy.

There are plenty of serious runners in an average parkrun, but there are also people who enjoy the exercise and then, as quite a few do in Marlay, head straight for the nearby pancake stand.

Started by Paul Sinton-Hewitt in October 2004 during an injury-induced lay-off from his half-marathon running, the first event in what became the parkrun series took place in Bushy Park, south-west London, with 13 of his friends.

Word spread
The concept was simple – a free-to-enter 5k run with reliable timing organised at a set location on a weekly basis. Then, as now, parkrun HQ is a shed in Sinton-Hewitt’s back garden. Word spread and, slowly at first, numbers grew. It wasn’t until 2007 that another run was established but others followed quickly after that.

By April of this year, 35,000 people were taking part in weekly runs.

There are four runs every week in Ireland, with more in the pipeline.

Malahide came first after Michael McMahon, a local recreational runner, got in touch with Matt Shields, who oversees the highly successful Northern Ireland operation, about setting up a Dublin event. It took 12 months to persuade would-be investors that the proposal – a one-off cost of about €7,500 with no further payments – wasn’t too good to be true.

“Understandably, people ask ‘where’s the angle?’ – they feel somebody has to be making some money out of it somewhere, that it’s some sort of scheme,” says Shields. “But gradually they come to realise it’s not and at that stage they tend to become very supportive.”

In fact, the organisation looks for local partners to put up just half of the start-up funds which they then match. Once established, about a dozen volunteers organise the weekly races and parkrun HQ provides all the technical and other support.

Despite agreeing to provide the venue, Fingal County Council couldn’t be persuaded to put up the €3,000 or so required to start the Malahide event but in the end a sponsor of the British operation got the ball rolling here.

Perhaps because they could see what was happening in Malahide, Dún Laoghaire Rathdown County Council was persuaded to write a cheque when Liam McCambridge came calling with a Marlay Park start-up in mind.

They were rewarded with the largest first run in the history of an organisation that now spans almost 250 weekly events in a dozen countries.
Runners simply register online at parkrun.ie, print off their individual barcode and bring it along when they run. Times are emailed to them later that day so they can gauge their progress.

“I suppose if you provide the right product at the right time, then people are going to take you up on it,” says McCambridge.

“This appeals to everybody. Fast club runners are using it as part of their training schedule while at the other end of the spectrum it’s completely family friendly; you can push your kids or bring your dog along, we don’t mind.”

“It’s an absolutely ideal location with a great running population,” he says of Marlay Park as this week’s 450 participants wind their way around the course. “I knew there was the potential there, just that somebody needed to come forward.”

Since then, others have done just that and runs are now organised each Saturday morning at Griffeen Park in Lucan, Dublin, and the Castle Demesne, Macroom, Co Cork. St Anne’s Park in Dublin is on course to be up and running by September with Clonakilty, Co Cork, due to start at the same time. More would-be event directors are at the planning stage with councils around the country.

“There seems to be a particular appetite for this in Dublin,” says Shields who started Northern Ireland’s first run three years ago.

“In fact, the Irish runs generally have been colossal. One of the things we find ourselves asking is ‘where are all the people coming from?’ and we reckon some must be travelling 30 miles or more to take part.

“In 12 months or so I think you’ll start to see new runs coming on stream every two to three weeks,” he says.

Somewhere along the line they may well play a small part in producing the next Sonia O’Sullivan. Getting upwards of 10,000 people out and into their locals parks for some exercise each Saturday morning, though, is quite a triumph in itself.

Why talking to strangers is good for you
4

Two to savour: A German Riesling and an Austrian Zweigelt, each for less than €8
10