Girls in my daughter’s class are calling her fat

I told her the next time it happens, to call the other girl ugly. Is this bad advice? 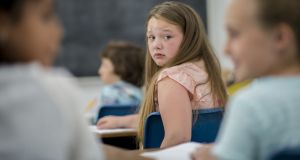 Hearing that your child is being picked on or bullied by other children is very upsetting as a parent. Photograph: iStock

Question: Our daughter is 11 and in fifth class. Over the past couple of months she has been unhappy in school and I had been putting it down to puberty. But recently she finally told me that some of the girls in school had been mean to her and one of them had called her fat, which really upset her. I was really angry for her and wanted to go in to tell her teacher, but she got upset and was adamant that this would make things worse.

I told her to tell the girl to f*** off the next time she says something like that or to tell her she is glad she is not ugly like her. Now I worry I gave her bad advice (because I was angry).

What should I tell my daughter to do and should I just go against her wishes and tell the teacher so she can sort things out?

Answer: Hearing that your child is being picked on or bullied by other children is very upsetting as a parent. It is completely understandable that you were angry or furious when you found out that girls in the class were being mean to her and making personal comments about her weight (which can be very hurtful to a child, especially at her sensitive age). However, being angry and upset can sometimes make us react in ways that may not be the most helpful. It is tempting to want to rush in to sort things out or to encourage your daughter to hit back verbally, when these knee-jerk reactions can make things worse. It is great that you are self-aware of what is going on and are considering what would be a more thoughtful, measured response.

The most important thing someone can do when they feel bullied is to seek support. It is great that your daughter has opened up to you and told you what happened to her. By listening to her and supporting her this will do a lot to help her feel better. Acknowledge with her how hurtful it can be when someone makes personal comments and that it is not right that the girl said these things. Once you have listened, the next step is to explore with your daughter potential solutions, which include thinking what she can say back if it happens again and also whether she needs the support of teachers or others to help her.

What should your daughter say back?

Generally, there are two problem reactions when someone says something hurtful or mean to you. One is to be passive and say nothing, which usually means you take the comment to heart. The other is to fight back aggressively (either physically or in words), which means you act in a similar way to the bully and can make the situation worse. The goal is help your daughter discover an assertive response, which is the middle ground between being too passive or too aggressive.

In practice this means helping your daughter find an assertive statement she can say the next time someone says something mean to her. A good idea is to brainstorm with your daughter her different options. For example, she might say “Don’t be so mean, I don’t slag you about how you look” or “I don’t care what you think, so back off”, or simply “what is the matter with you? What is your problem?” Help your daughter identify a response that might work for her. Getting the tone right is as important as the statement, and sometimes it works to rehearse it in role play.

Whether to tell the teacher

Often it can be a “big ask” to get a child to be assertive and this can set them up to fail (or make them feel that they are responsible). Often children need support from others to stand up for themselves. Explore with your daughter what support she needs and who can help her. Usually it can be a good idea to tell the teacher and indeed a good teacher can do lots of things to help ( such as having a quiet word with the girl in question, involving the two girls in a discussion or doing a whole class input on the empathy and how personal comments can hurt). However, children can fear that telling the teacher can make things worse, and indeed sometimes this is the case if it is handled insensitively.

Take time to talk through this option with your daughter and how the teacher could help. In addition there may be other children in the class who could help her, perhaps by standing up for her if mean comments are made, or simply being good friends to her. Whatever plan you decide, it is important to talk things through with your daughter first and to try and get her on board where possible.

As well as helping your daughter get support and to be assertive, it is also useful to help her change perspective on what was said to her. Explore with your daughter what the mean comments say about the other girl (for example, her own insecurity) rather than your daughter. This conversation could uncover your daughter’s own feelings and insecurity about body image, which gives you a chance to support her around this (acknowledging the unhelpful pressures on girls around this and so on). Once again the key thing is to be there to listen and support her.