No more excuses – time to start pounding the pavements, again

You can run, but you can’t hide from the exercise gear fashion police 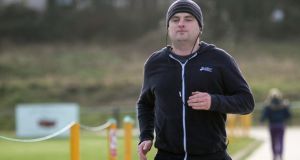 A few years ago, sitting at home one quiet October afternoon, I made an announcement. “I’m going to run the Dublin marathon.”

No doubt many of us come up with these hare-brained schemes every now and again, but it takes the dedicated few to actually follow through on them. I certainly didn’t.

Let’s face it, my idea of getting in emergency supplies in case of a power cut or some such hitch during the recent stormy weather was making sure we had a multi-pack of Tayto cheese and onion in the press.

Anyway, in the meantime I’ve yet to darken the entry form of the Dublin City Marathon so, back in the present tense, it was with interest that I realised during the apocalyptic aftermath of yet another food and drink-laden Christmas that The Irish Times was initiating the Get Running series.

Before I could convince myself otherwise, I had added my email account to the mailing list and before I knew it was watching the helpful and, most importantly, not-at-all-scary videos put together by Mary Jennings, as well as reading some of the motivational links and studying the training plan.

To all who know me as a lazy exercise-phobe with a beer gut and an unwisely deep relationship with savoury snacks, I have a confession: I dabbled with running in the past. But I didn’t inhale.

Yes, almost five years ago I joined a boot camp organised by a friend – again, it started around the guilt-ridden post-yuletide weeks – and for a couple of months enjoyed it immensely, despite it being hard as hell. For me anyway.

The culmination of my adventure was the completion of a 10km run in the not exactly Olympic “A” standard time of one hour and nine minutes. Shortly afterwards we were away on holidays, I missed a week of the boot camp and never went back. The seal was broken and it became too easy to come up with excuses to miss more weeks. To my great regret.

So, having the oh-so-gentle kick up the backside rendered by Mary Jennings has been just what was needed to get me back. I’ve found that sticking to the routine, and sticking to Mary’s training plan, has been crucial in terms of not being able to come up with excuses.

Part of my reasoning over the years for not getting involved was down to the fact that we live at the top of a hill. However, I’ve found that, as the weeks have gone on, having to finish the run on the uphill stretch has become less difficult than I imagined.

I paid for it the other day, however, when I opted for a change of sceneryand took the new running/cycling lane on the nearby ring road, and found my legs protesting much earlier in the run than had been the case on my downhill/uphill jaunts.

Afterwards, thanks to the trusty Runkeeper app on the phone, I realised I had gone off too fast, as my average pace for the total run and walk was down from a previous best of six minutes, 58 seconds per kilometre to six minutes, 35 seconds. “You’re not ready for it,” roared my legs.

Another reminder of my amateur status came in recent days when, for the purposes of this piece, I met the photographer at the local running track. “Where’s your running gear,” he asked with a chortle.

Most of my “gear” is like something worn in the London Olympics. In 1948.

The lesson being, I’ve a lot of catching up to do. But, since January, I feel that the process has begun.