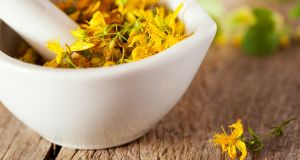 St John’s Wort: the herb is now available only on prescription in Ireland, although it is still available over the counter in Northern Ireland. Photograph: iStock

We’re in a sleep crisis. Long and busy days, too many screens, not enough sunlight, staying up too late, getting up too early and, of course, stress: they’re all throwing our sleep patterns out of synch.

In 2014, a study by scientists at Oxford, Cambridge, Harvard and other universities warned that a lack of sleep was leading to serious health issues including cancer, obesity and diabetes.

Of all the over-the-counter herbal remedies, sleeping aids are perhaps the most common, with products such as Nytol, A Vogel Dormeasan Sleep and Melissa Dream available in most pharmacies. Many contain hops, valerian, lavender, lemon balm and chamomile, all herbs which are traditionally associated with sleep and calm. Many herbalists will also place them into herbal teas.

A scan of the National Folklore Collection (NFC) shows there’s not a huge amount of information about remedies for sleep problems. This isn’t really surprising: people didn’t have electricity, lives were calmer and we didn’t spend our days in front of screens. We went to bed when it got dark and got up when it was bright.

A few sprigs of fresh lavender have long been used as a sleep remedy; now, many sleep balms are infused with lavender. Pine needles under the pillow are also recommended from one account collected in Cork.

Another piece of advice found in the NFC is for people to drink milk which is boiled with an onion. We now know that both contain L-tryptophan which could help us get to sleep faster, but only in fairly large doses. So the effect here may be psychological.

A 2005 study, published in the Journal of Sleep, found some evidence that hops and valerian combined could lead to modest sleep improvements. Research has shown that lavender does indeed have calming effects. But while chamomile is the famous sleep herb of all, there’s very little evidence to show that it can induce sleep; it won’t do any harm but its benefits may be psychological.

One cure, found in the NFC and unearthed by Trinity PhD candidate Fiona Shannon, advises people with a cold to put an onion in a stocking, wrap it around their neck and go to sleep. It sounds odd, but the key point may not be the onion, says Shannon: it is the ritual and, even more so, the rest that makes the difference to our health.

Editor’s note: But it seems everyone wants to read about them. How much should a healthy person fart, October 15th, 2016, featured in the Most Read articles that week.

When it comes to digestion, there are certain red flags which mean a visit to a medical doctor, not a herbalist, is needed. These include rectal bleeding; major and persistent changes in bowel habits; sudden and unexpected weight loss; difficulty in swallowing; persistent appetite change; and persistent and increasing stomach pain or heartburn.

But for mild cases of discomfort, fennel seeds are a digestive aid for reducing flatulence: just nibble a few after eating. Peppermint tea is also a digestive aid, while ginger has long been used to alleviate nausea.

Fiann Ó Nualláin, herbalist, gardener and author of The Holistic Gardener: Natural Cures for Common Ailments, says that bitters including dandelion help digestion. He also suggests apple, grapes and pineapple, as well as green tea. Other carminative herbs (which reduce bloating and flatulence) include basil, chamomile, mint, lemon balm and yarrow. Most herbalists will also recommend garlic and a probiotic live yogurt. For heartburn, liquorice and peppermint are often used. Aloe vera juice is becoming popular but there’s limited evidence for its effectiveness and it can have side effects that include cramps and diarrhoea.

In the NFC, ginger and cardamom appear regularly for indigestion or stomach spasms. Bread soda, mixed with a cup of cold water, is cited as a cure for heartburn across all parts of Ireland. Dandelion is included as a cure for indigestion and as an aid for digestion, as is stewed yarrow. Chamomile, watercress and nettles (boiled and eaten, or the juice drunk) and the juice of boiled blackberry leaves are listed for “bad stomach”. And for constipation, a cure that seems to make some sense: “ a strong infusion of senna leaves, add prunes . . . put in a glass jar . . . a few eaten during the day will suffice to cure obstinate cases of constipation.”

According to Dr Dilis Clare, it is “extremely safe” for anyone who is not taking any medication. “It uses the same enzymes in its metabolism as some other drugs do. If a person is not on any drugs, they can take it; I would give it to children and to old people.”

Hypericum can react negatively with more than 50 per cent of prescribed drugs. But, says Clare, those who are not on prescription medication can take it.

A 2008 Cochrane review – the gold standard in reviews of health evidence – looked at a number of studies and found that hypericum extracts were “superior to placebo in patients with major depression, similarly effective as standard antidepressants and with fewer side effects than [them] .”

St John’s Wort is now available only on prescription in Ireland, although it is still available over the counter in Northern Ireland.

Herbs may also have a valuable placebo effect. Placebos are proving effective in treating depression and anxiety – there’s evidence that placebos bring about physical changes in the body and that the experience of receiving medical care – whether that’s from a herbalist or a GP – seems to make us feel better, and to help alleviate anxiety and depression.

Beware anyone claiming that a particular herb can “cure” depression, stress or anxiety. Beware anyone making big claims for herbs as a miracle cure for depression and don’t automatically believe studies that have been commissioned by a company trying to sell you the very same herb.

Herbs can offer gentle support and comfort, although anyone on anti-anxiety or anti-depressant medications should consult their doctor or pharmacist before taking herbs; while they can be perfectly safe to use, they can also interact with prescribed medicines.

The US National Centre for Complementary and Integrative Health (NCCIH), a federally funded agency, warns against self-medication with herbs as a replacement for seeing your doctor, pointing out that inadequately treated depression can become severe.

“Some people have their stress and survival mechanisms permanently switched on,” says Clare. “Sometimes it is about getting a person to stop looking out for the bull in the field, and herbs can help with this.

“There’s no one relaxing, magic herb,” says Clare. “But different herbs have a range of actions to help relax with few side effects.”

There is scant clinical research on herbs and much of what is taken is based on traditional use, anecdotal reports and science’s current understanding of their chemical properties. Herbs ordered over the internet can be wrongly labelled and may contain poisons. Anyone with a medical condition should consult their doctor before taking a herbal remedy, as herbs can interact with prescribed medications.