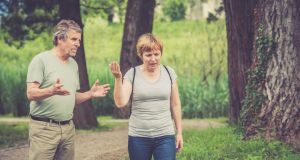 It is not okay for your husband to deride you in public.

Question: I am a woman in my mid-50s, married with a family. Ten years ago, I caused an enormous amount of pain and suffering to my husband and family when it was discovered that I had an affair that had lasted intermittently for two years. The other person did not reside in Ireland and so contact was infrequent, but still occurred from time to time.

It was discovered accidentally, and I made matters much worse by initially denying it. We went to couple counselling before my husband backed off from this, followed by me undergoing personal counselling. We stayed together, initially for the children’s sake, gradually managing to reform a bond of sorts and then in time to reconnect our relationship, both physically and emotionally. Ironically, our physical sexual relationship became much better, more open and honest, over the past 10 years.