When Ali announced he had Parkinson’s aged 42 , people blamed the boxing ring 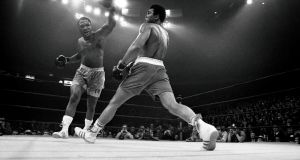 Muhammad Ali was more than a fighter in the boxing ring. He fought against racism, refused to be drafted during the Vietnam War, and he fought Parkinson’s disease for more than 30 years until his death earlier this month.

Prior to his conviction for refusing the draft, his fighting style was unique: literally floating and dancing his way out of trouble. Three and a half years later he was slower but could absorb a lot more punishment in the ring. In one of his epic bouts with Joe Frazier, he shipped some 440 blows in one night.

So when Ali announced he had Parkinson’s disease aged 42 and just three years after retiring from boxing, people blamed the frequent head injuries sustained during his career in the ring. And while it probably played a role, there is no linear relationship between head trauma and Parkinson’s. Indeed, given his relatively young age at diagnosis, certain genes are likely to increase his susceptibility to the disease.

Parkinson’s disease is a chronic neurological illness precipitated by the death of brain cells that produce a chemical messenger called dopamine. Nerve cells in a deep part of the brain, called the substantia nigra, degenerate. These cells make dopamine; as the levels of the brain chemical decrease, the symptoms of Parkinson’s disease begin.

If you imagine the substantia nigra as the brain’s “gearbox” and consider dopamine as the main lubricant for the gearbox, then as this part of the brain seizes up, the three main symptoms of tremor, muscle stiffness and bradyknesia (a slowness in initiating movement with associated freezing) appear.

Other problems experienced by people with Parkinson’s include difficulty with swallowing and speech, constipation and sleep disturbance. Both depression and dementia can also occur. About one in 100 people develops Parkinson’s disease; it affects men and woman in equal numbers.

A difficult moment for Ali’s millions of fans was the opening ceremony of the 1996 Olympics in Atlanta. He took the Olympic torch in his violently shaking hands and, with agonising slowness, he lit the flame. In a single frame we saw the depth of his Parkinsonian tremor and the difficulty initiating and maintaining movement – both hallmarks of the disease.

But he didn’t shy away from the limelight after his diagnosis. Frequent TV appearances showed a mask-like face and his slow gait. His voice became a whisper at times; had we seen his signature it would have shrunk over the years, an example of the micrographia commonly found in Parkinson’s patients.

At rest, the characteristic tremor involves the rubbing together of the thumb and forefinger (doctors refer to this as a “pill-rolling” tremor).

So what evidence is there for head trauma as a cause of Parkinson’s disease? Head injuries can cause inflammation in the brain, which may lead to cellular change. A 2013 study found that people with head trauma that resulted in a concussion were 57 per cent more likely to develop Parkinson’s disease than those who never experienced such head trauma. But much of the research is less clear cut leading experts to see Parkinson’s as a more nuanced disease.

Sometimes referred to as a boutique disease, its effects are unique to each person, you cannot predict which symptoms you will get or when you will get them. You do not die from Parkinson’s but rather with the disease. In Ali’s case , he died from septic shock brought on by a respiratory tract infection.

Thirty years of fighting later, the cruel reality of a boxer no longer able to float like a butterfly must have been some test of faith.