The first 1,000 days are vital, so infants must get the best care at this stage of their life 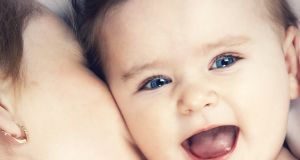 For the child to develop properly, the relationship with the primary carer is important. Photograph: Thinkstock

We all know the early experience of infants and toddlers matters. My mother often says, “Sure he hadn’t a great start” when talking about someone who is struggling in life.

Her knowledge isn’t dependent on the latest psychological research; it represents what we all know. Our early experience seems to have a lasting impact on us as we grow into adulthood. It’s common sense. The start of our lives lays the blueprint for the future.

One man who knows this more than most is Prof Kevin Nugent. From Mullingar, Co Westmeath, Nugent has spent most of his working life in the US, where he is founder and director of the Brazelton Institute at Boston Children’s Hospital, as well as being on the faculty at Harvard Medical School. He is also professor emeritus of Child and Family Studies at the University of Massachusetts at Amherst.

Nugent is one of the world’s leading experts on early child development. He has written many books and book chapters and more than 100 scientific articles on child behaviour and development, and on parent-child relationships.

He was in Ireland last week to address the 45th Conference of the Psychological Society of Ireland (PSI), for whom early child development is a core advocacy issue.

While here, he also presented to the Oireachtas health committee at the invitation of Fine Gael TD Jerry Buttimer and met Minister of State for Primary Care, Mental Health and Disability Kathleen Lynch.

“Brain development in the first three years of life is more extensive, more vulnerable to environmental influences and has a longer-term impact than was previously thought,” he said.

“Moreover, this accumulated body of evidence has confirmed that early relationships and parental care-giving play a critical role in the development of the child’s brain; influences social, emotional, and cognitive development; and even mediates life-long health outcome.”

Nugent described the emerging field of infant mental health as the area of study and practice concerned with the inner lives of infants and toddlers and their primary relationships with care-givers.

He described infant mental health clinically as “the healthy social and emotional development of a child from birth to three years” and said “it is fast becoming a very significant public health issue, spurred on by a growing field of research and clinical practice”.

Research in the field has grown significantly over the past two decades and not only supports my mother’s common sense but provides evidence we as healthcare providers and policy-makers cannot ignore. The research is unambiguous in its findings: our early experience matters.

We know children who suffer neglect, for whatever reason, are at a distinct disadvantage in life. Researchers tell us it is the first 1,000 days of life that matter most. This is based on compelling research that demonstrates infancy is a critical period for social and emotional development and positive experiences within a baby’s first years of life can have lasting benefits for the remainder of the child’s life.

This research points to the critical window of opportunity that exists in the first three years of life where the rapid brain growth will not be repeated in later years. It is during this period of rapid brain development that brain pathways are established. The formation of these pathways depends on the experiences the infant or toddler has. This happens in the context of relationships, especially the relationship with the primary carer.

The mental health and wellbeing of the parent, in turn, must be supported by the family and the community. The National Scientific Council on the Developing Child at Harvard University recently said: “Children are our most precious national resource; they are the living messages to a time we will not see, and new scientific advances are showing the crucial importance of the foundation years and especially the first 1,000 days from conception until age two as a springboard for neuro-cognitive development, life-long health and wellbeing and socioeconomic success”.

The challenge for society is to get at the complexity that lies behind what is generally accepted as common sense: it’s the start that matters. Herein lies the second challenge: the first 1,000 days of life don’t fit neatly into any particular service.

The first 1,000 days span the prenatal, perinatal, primary care, mental health service, social welfare service and so many more. It cuts across all the professions, because supporting the relationship between primary carers and their young children is a primary task for all early childhood professionals.

Strong relationships are at the foundation of healthy child development, family functioning and a flourishing society. Infant mental health is everybody’s business.

Nugent pointed out the high economic cost of not providing support and interventions to assist in the early psychological, social and emotional development of infants and toddlers.

“James J Heckman, who was awarded the Nobel Prize in Economics in 2000 for his innovative work on the economics of human development, analysed investments in early childhood programmes and determined that the greatest gains can be made at early ages, because the social and cognitive skills learned by the very young set a pattern for acquiring important skills later in life. He believes early interventions result in much higher economic returns than later interventions,” Nugent told delegates at the Psychological Society of Ireland’s annual conference.

The Psychological Society of Ireland is calling on the Government to establish a review group to consider best practice models used in our neighbouring European countries to promote infant mental health in the context of supporting the primary relationships of the infant and toddler.

We do not need to re-invent the wheel but rather review what models would work best in an Irish context. This group needs to not only review and recommend but crucially to detail an implementation plan with a clearly defined timeline. We cannot afford to continue ignoring infant mental health. It’s just common sense.

Dr Paul D’Alton is president of the Psychological Society of Ireland. He works at St Vincent’s University Hospital and at the School of Psychology in UCD