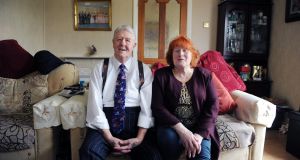 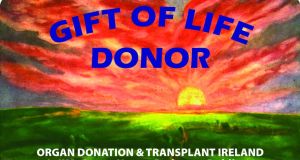 Donor card: With more than 600 patients awaiting transplantation in Ireland, one donor can potentially help nine other people

When Barry Shiel was a teenager, he was watching television with his mother when an organ donation ad came on. He expressed an interest in being a donor and his mother, Maureen, laughed and said he wouldn’t be needing to do that anytime soon.

In February 2011, at the age of 25, “fit, sporty and fun” Barry was killed in a car crash in Galway and Maureen remembered that teenage wish.

1 Large crowds gather on Dublin’s Grafton Street on eve of lockdown
2 Galway nursing home sees 26 out of 28 residents test positive for Covid-19
3 Body of woman and baby boy found in separate locations near Lucan
4 Gym owner who planned to stay open changes mind after gardaí visit
5 One hundred Irish retailers for all your online Christmas shopping
6 Lockdown meals: 50 great Irish restaurant food boxes to go
7 Borat 2: Rudy Giuliani’s trouser-reaching scene is the work of a daring young woman
8 Life under Level 5: Where can I go, who can I see, what is closed and what is open?
9 Thousands of gardaí mount checkpoints and patrol parks, beauty spots
10 Bus drivers faced ‘mayhem’ as passengers tried to travel, union says
11 Matt Damon sends message of support to children, families and staff at Temple Street
12 'You can’t see the waves coming' - crew describes dramatic rescue of ship off Irish coast
13 Boxing clever in Donnybrook for €825k
14 Guinness brings out a non-alcoholic version of the black stuff
15 Nearly 400 Brazilians have tested positive for Covid-19 in Ireland, data shows
16 My Irish passport has calmed tempers at borders and airports
17 International Dublin Literary Award: Anna Burns becomes first Irish woman to win €100,000 prize
18 How much will a Covid-19 vaccine cost?
19 How long can Government afford to keep State pension age at 66?
20 Tennis clubs in Republic of Ireland to close under Level 5 Covid-19 restrictions
21 Google's incredible power is the result of decades of regulatory failure
22 Paul Coulson plans record $1.8bn Ardagh investment
23 No basis for talks on a new public service pay deal, says union chief
24 Suzanne Lynch’s US Election Diary: Trump ready to go on the attack over Biden's son in final debate
25 Developer’s impeccably restored Fitzwilliam Square Georgian for €3.5m
26 John Gilligan arrested along with two others in southern Spain
27 Why work more than 15 hours a week?
28 Jobs, incomes, the deficit: how much will Level 5 cost us?
29 Philip Reid: Hard to find the sense in closing golf clubs
30 Shock at golf clubs as sport faces shutdown in Level 5
31 Residents take court action over development of ‘The O’Rahilly’ site
32 Covid-19: State moves to Level 5 for six weeks with hopes of ‘meaningful’ Christmas celebrations
33 Traffic light system for Covid detection to operate at Irish airports in November
34 Covid-19 Level 5 support bubbles: Everything you need to know
35 The biggest game in their history? Ireland women v Ukraine - all you need to know
36 Taoiseach says he is opposed to curfews as a way of controlling Covid-19
37 Newton Emerson: The North is not the reason there cannot be all-Ireland zero-Covid
38 Finn McRedmond: Ireland’s sick system has been exposed by Covid-19 gender imbalances
39 Covid-19 restrictions in Europe: how does Ireland compare?
40 Suzanne Lynch’s US Election Diary: Trump ‘walks out’ of TV interview at White House
Real news has value SUBSCRIBE