How travel fuelled a passion for healthy food

The author of the ‘Fuel Food’ cookbook, Oliver McCabe of Dalkey’s Select Stores, was inspired by eating trends abroad 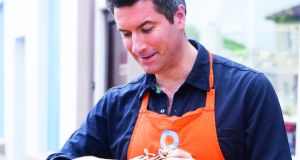 Oliver McCabe: ‘People are stressed and they often don’t have enough time to cook. We all have to perform well on every level nowadays.’ 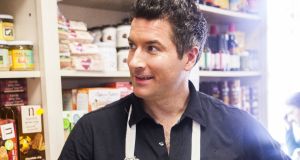 Situated on a corner a few minutes’ walk from Dalkey Dart station, Select Stores is one of those wholefood stores and cafes that people make special journeys to visit. With its outdoor stall of fresh fruit and vegetables and shelves packed with dried, vacuum-packed and fresh ingredients for the healthiest meals, it’s a Mecca for health-food fanatics, vegetarians and vegans of south county Dublin.

So when owner Oliver McCabe published his first cookbook, the Fuel Food Cookbook (Mercier Press), this year, my only concern was that the quaint shop and cafe with seating for about 25 people would be mobbed with newcomers.

Not so on the Monday afternoon when I visit with my 19-year-old vegetarian daughter to try out some of the recipes from the cookbook.

“It’s very quiet in Dalkey in the winter, we only get the day trippers when the weather gets a little warmer,” says McCabe, sitting with us as we sample his veggie bake, quinoa burgers with pesto and hummus with delicious energy bites to follow.

McCabe’s back story is as interesting as the current incarnation of Select Stores. His parents, Paddy and Margaret McCabe, set up their greengrocer’s store in 1959 selling everything from vegetables to gas cylinders and moss peat.

Paddy McCabe died in 1980 but his wife kept the store going with the support of her five children. In 2001, after spending time in Australia and the United States, Oliver McCabe returned to work in the shop.

Three years later, he had transformed Select Stores into the healthfood store it is now, having taken a course at the Irish Institute of Nutrition and Health to bolster his knowledge along the way. Last year, McCabe installed a wholefood kitchen and delicatessen and his sisters continue to work with him. “The only difference is that I’m the boss and I’m the youngest in the family,” he says with a grin.

McCabe is one of a bunch of pioneers who have returned to Ireland inspired by eating trends they witnessed abroad. David and Stephen Flynn at the Happy Pear in Greystones, Co Wicklow, are also part of this breed of foodies who have helped to bring wholefoods to a wider audience here.

More established vegetarian cafes such as Blazing Salads and Cornucopia in Dublin city centre and Denis Cotter’s Cafe Paradiso in Cork were the trailblazers that created a space for others to follow. And, artisan food producers weighed in with new organic cheeses, smoked fish and fermented foods, creating local markets that drew more people in.

“Blazing Salads in Dublin, the Good Things Cafe in west Cork and the Hop Sack health store in Rathmines were inspiration for me – and the Happy Pear opened about six months after I started with the juice bar which I’d seen in Australia,” says McCabe.

The Fuel Food Cookbook has a broad range of recipes for smoothies and juices.

In the book, award-winning journalist and Dalkey resident Robert Fisk has written a nostalgic piece on his memories of Select Stores through the years. Children’s author Gordon Snell gave McCabe tips to write a little each day as he embarked on his book.

In fact, McCabe suggests it’s the first Irish cookbook to signpost the absence or presence of the 14 most common allergens in all its recipes.

The book also includes an introduction to the essential nutrients we need to eat regularly. “People are stressed and they often don’t have enough time to cook. We all have to perform well on every level nowadays. The whole idea is to give people easy recipes to cook at home which will keep well for three or four days in the fridge and most of which can be frozen,” says McCabe.

It’s not all about vegetables in McCabe’s book, however, and he offers suggestions on how chicken, fish and meat can be used as alternative ingredients in some of his recipes. His spicy mango and coconut fish dish includes monkfish, salmon, whiting or hake but it can be made with chicken or prawns either.

He also includes a tasty-sounding chorizo and cheese omelette, recommending the Ferguson’s award-winning Gubbeen Farmhouse chorizo as the ingredient of choice.

McCabe plans to give cookery talks and demonstrations in Select Stores and other locations.

He will also continue his involvement with the Dalkey Book Festival, the mid-summer festival in Dalkey that attracts those day trippers to this charming coastal village in the warmer months.

A letter to my father: Did you regret leaving Australia?
3

How will the Covid-19 era affect our youngest citizens?
9