Helping your workforce work up a sweat

Employers who are supporting their workers to get fit are reaping the benefits of a happier, healthier workforce 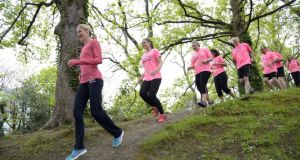 Does your workplace have a running club, a fitness programme or an exercise initiative? Share it at fitness@irishtimes.com, or facebook.com/irishtimesgetrunning

The topic of expenditure, in its many forms, on health spending is often contentious, with claims of false economies fairly routine.

But when organisations such as the Irish Heart Foundation (IHF) claim that employers can reap a threefold return on their investment by keeping their workers fit and well there appears, at the very least, to be a healthy margin for error.

Employers continue to take the plunge with initiatives such as the Royal College of Surgeons in Ireland’s lunchtime running group, which is set to hit the streets of Dublin 2 for the first time today.

At the College of Surgeons there is already a variety of fitness options open to employees but the running group – the RCSI Breakers – has been established with a specific goal in mind. It aims to prepare people for an event in August, the Great Pink Run, which is a fundraiser for Breast Cancer Ireland; this organisation is also based at the college headquarters on St Stephen’s Green.


Inspired by Get Running
Last year about 40 staff took part in the event, which is run over 5km and 10km. Niamh Burdett is behind the initiative, inspired in part by The Irish Times Get Running programme, and says she hopes to more than double that number to 100.

“I do a bit of running,” she says, “and there are quite a few others in here who do too, but the idea was to establish a training programme that would be useful to everyone, no matter what their level. It [will be run] over 17 weeks, with complete beginners starting at week one and others free to join in whenever suits them best.”

The college is providing funding for the programme and Burdett has brought in Spectrum Health to help run it, so professional training is provided along with various forms of advice, much of it available in-house. Participants will also get a weekly email, documenting their progress and outlining the next step of the programme.

Lack of funding needn’t be a barrier, as has been shown in St James’s Hospital, Dublin where a physiotherapist, Joanne Dowds, and one of the managers decided to try to do something to improve the health and fitness of hospital staff after attending a conference about the subject.

“I used to be quite heavy myself, so the issue is close to my heart,” she says. “I think if you’re telling other people to look after their health, it’s probably important that you look as if you’re conscious of it yourself, but the conference prompted us to think about what we could do in here.

“The programme is supported [but not funded] by the hospital. This year is the second year, and it’s gone very well.”

A lack of resources means that Dowds and her colleagues have to target their efforts and so, this year, about 50 applicants had to be whittled down to 10 participants, with those who did best over the couple of months crowned the Fitness King and Queen. “The guy who won lost just over three stone in the two months and he has lost about six stone at this stage. He has changed his life and really embraced the idea of a more active lifestyle but everybody benefited, I think. They all lost about half a stone.”

Many companies get involved with initiatives such as the IHF Active@Work programme (irishheart.ie) which, it suggests, can provide employers with a healthy return on investment. Various VHI offices, Abbott Ireland in Longford, Janssen Pharmaceuticals in Ringaskiddy, Genzyme in Waterford and St Vincent’s Hospital in Dublin are among the scheme’s gold-medal winners.

Leo Pharma’s Crumlin operation is another, and the company supports a range of initiatives but a recent Operation Transformation programme helped 57 of the 360 or so staff shed a total of 30 stone.

“We already had a lot of things – football, golf and others – going on among the staff, but we decided last year to organise them in a bigger, more centralised way and the reaction has been great,” says Orla Slevin, the company’s occcupational health adviser.


Transport initiatives
Transport is a key part of the business of the multinational engineering firm Arup, and it makes a particular point of promoting walking and cycling initiatives from its offices. It provides local route maps and practical supports that include significant Cycle to Work scheme top-up payments and on-site showering facilities, with towels, each day. There are also inter-office initiatives such as its “Amazing Race”. Last year, this involved 715 staff from around the world covering a combined 675,000 miles, in different ways, and burning a combined 22 million calories along the way.

The engineering sector has been hit pretty hard by the economic crisis but Arup has continued to fund the initiatives, says Macdara Ferris, the company’s environmental manager. “If anything, it’s probably something we’ve put a bit more emphasis on,” he says. “It’s a good way of keeping morale up when naturally things have been a bit difficult and we see the benefits. About 28 per cent of our staff in Dublin cycle to work.”

According to the National Transport Authority, the proportion of people travelling into Dublin city by bike is about 5 per cent. It’s pretty hard to argue with numbers like those.

Does your workplace have a running club, a fitness programme or an exercise initiative? Share it at fitness@irishtimes.com, or facebook.com/irishtimesgetrunning