Grit Doctor: Out of training with a charity 10km looming

Is it possible to lose all my fitness in the space of two weeks . . . by the pool 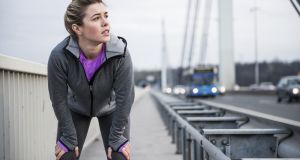 If I take a fortnight off, I definitely feel it when I resume my running routine. My legs are sore, I get out of breath quickly and generally struggle through for a few runs. Photograph: iStockphoto

Q I’m running in a charity 10km next week and I’m completely out of condition. It’s weird because I usually run four miles most days so 10km isn’t too much of a stretch. However, I’m just back from a fortnight’s holiday where I did no exercise except swimming; by which I mean sunning myself in a pool nursing a cocktail. I went for my usual four-miler this morning and had to stop three times. My legs feel like lead. Is it possible to lose all my fitness in this short space of time? What can I do during this week to improve it? I’m in a bit of a panic about the race. Bea

A I feel for you. It’s not clear from your letter how old you are or how long you’ve been running but let me reassure you that, as a veteran runner of 15 odd years and now aged 40, if I take a fortnight off (and I do sometimes), I definitely feel it when I resume my running routine.

My legs are sore, I get out of breath very quickly and generally struggle through for a few runs. According to coach Jeff, two weeks away from running can result in a 6 per cent decline in VO2 max – which is your body’s ability to transport and use oxygen during exercise. This sounds grave, but in reality marks only a very slight drop in aerobic fitness.

Jeff also says muscle and neuromuscular co-ordination will be minimally affected after a two-week break. So, loosely translated, the worst run in your return to fitness is already done and that pain in your legs is nothing to worry about. I have two training options for you.

I’d grit my teeth and force those leaden legs back out tomorrow to run your usual four miler. If you are anything like me, this second run will be considerably easier than the first.

On day two, have a rest. Remember, try to avoid cocktail drinking on rest days.

On day three, I’d do a very short fast run (ideally with weights strapped to my wrists, but I am the Grit Doctor and enjoy these added burdens).

If you go for the “no weights” option, try to incorporate at least a bit of hill training into those two miles. The idea is to make this run hard, but short. It will do wonders for getting your fitness back up to par.

So, with wrist weights on, or a hill to climb (or both if you are a glutton for punishment), run fast for two miles. If you can’t run the whole distance fast, break it up into intervals of super fast sprinting followed by ultra slow recovery jogging, trying not to stop at all over the two miles.

The following day try to run really slowly without stopping for six miles. If you can manage that on day four, it will really take the pressure off because you will know that you can make it round the course on race day.

You will be sore afterwards, so rest the next day and then just do short sprints the following day (as per day three), with a rest day before the race. To do this, you will need seven days, the eighth being race day.

If not, the key thing is to get in one long run of six miles at least two days before your race, and that way you have proved to yourself that you can do it which will give you a massive confidence boost.

If all of this is proving too much, don’t panic. I have a grit-free plan for you as well.

Rest this week mainly, doing your occasional normal run when you feel up to it and stopping whenever necessary.

Take advantage of any sunshine and the opportunity of being in holiday mode to carb-load before the race. Walk or jog the race itself, if you can be bothered.

On a serious note, walking or jogging the race is a perfectly acceptable option if you can’t recover your fitness in time, or have genuine concerns for injury should you adopt the grittier programme.

Or, if you are relatively new to running and the above is simply beyond your ability, I recommend walking or jogging at your own pace.

There is nothing worse than causing yourself an injury during this next week that prevents you from taking part at all. Listen to your body and know your limits.

It will be infinitely more satisfying to run the whole way of course, dare I say sprinting that final 500 yards and smiling as you cross the finishing line to the cheers of your family and friends.

Have that vision in mind all the way round your preparatory punishing six miler. It is is going to hurt.

Drink gallons of water over this next week as the weather is hotting up, and get a good sleep every night. You can definitely do this, Bea.

The Grit Doctor says: You snooze, you lose.

Sean Moncrieff: Covid has brought out the best in us. It still does
10