From Roche to Rás: why cycling has become cool again

As well as the thousands commuting by bike, cycling is among Ireland’s top three participation sports 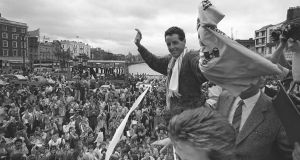 Cyclist Stephen Roche’s triumphant homecoming to Ireland in 1987 after winning the Tour De France. His victory sparked a new wave of interest in cycling.

When Stephen Roche won the Tour de France back in 1987 Ireland caught cycling fever. The Dubliner’s open-top bus homecoming through his native city was akin to a papal visit.

It was 12 months before Jack Charlton’s boys in green went to Euro ’88 and rugby was still very much a minority middle-class sport.

Aside from Barry McGuigan, Denis Taylor, and Eamonn Coghlan, our drab little pre-Celtic Tiger Ireland didn’t win much on the international sporting stage.

But while Roche and his world-beating fellow racing cyclist Sean Kelly were true international stars and competitive cycling boomed for a time, it didn’t last long.

Commuter cycling was seen as the preserve of those too poor to buy a car or who were crazy enough to compete with trucks and cars on a road network with no cycle lanes. Those on two wheels were viewed as a nuisance or oddballs or both.

Some of those attitudes linger, but cycling has undoubtedly become cool again.

Commentators say a combination of increasing traffic congestion, soaring fuel prices and a shift towards healthier lifestyles have all contributed to the cycling boom.

And factors such as the cycle-to-work scheme and the popularity of the now disgraced Lance Armstrong – the sport’s first global superstar – very directly caused the boom and fuelled it once it began.

Key to retaining those new to the sport has been the emergence of “sportives” for the first time in Ireland.

These are timed mass participation events ranging from about 50km to 200km but they are not races.

Participants are simply out to complete the course; the addition of timing giving each rider personal goals to aim for on the day and to train towards over the longer term.

Cycling Ireland’s chief executive Geoff Liffey agrees Lance Armstrong’s popularity in particular encouraged droves of men over 35 to get involved, especially if they had gained weight or picked up injuries that made a non-contact sport perfect for them.

One of that tribe is Wexford man Phil Skelton. “I’m cycling the last seven or eight years, I took it up in my late 40s.

“Turning into a fatter middle-aged man turned me on to cycling. I had run a few marathons but my knees were giving me trouble, I needed something low impact.

Having first been encouraged to try cycling by a friend, he trained for the Sean Kelly Tour of Waterford sportive. He has since progressed to cycling holidays on which he’s climbed some of the infamous mountain passes the Tour de France tackles, such as Alpe d’Huez.

“Once you start it’s addictive,” he says.

After two cyclists he knew were killed on Wexford’s roads within an eight-month period in 2012 and 2013, Skelton’s mind turned to road safety.

He began looking at what other countries had done to make cycling safer and says of all of the ideas, making it an offence for motorists to overtake cyclists any closer than 1.5 metres “was the one that jumped off the page”.

Skelton, a 52-year-old member of Slaney Cycling Club, began Stayin’s Alive at 1.5, an advocacy group working towards the implementation of the 1.5-metre safe passing rule in Ireland.

“Having cycle lanes separated from the rest of the traffic, like they do in the Netherlands, is also a huge part of it.”

Asked to describe cycling in Ireland at present, he laughs and says: “Safe generally, but with a few hairy moments.”

He believes the cycle-to-work scheme, under which tax breaks are given to those buying a bicycle of up to 49 per cent of its value, has proven hugely successful.

And the bike-rental schemes, which started in Dublin but have now been extended to other cities, have been instrumental in introducing people to cycling.

Dublin City Council’s “canal cordon count” showed the number of cyclists crossing the canals in the morning rush hour has exceeded 10,000 for the first time, more than double levels 10 years ago when just under 4,000 crossed the canals between 7am and 10am.

Sport Ireland – formerly the Irish Sports Council – says cycling is now in the top three participation sports in the country and is ahead of, for example, golf, Gaelic football and hurling.

According to its Irish Sports Monitor report for 2015, running and swimming are the most popular sports, with 8.8 per cent and 8.7 per cent of the population respectively participating once a week.

Cycling is next on 7.1 per cent followed by soccer on 5.2 per cent.

The biggest financial backer of the sport in recent years has been An Post.

It sponsors the hugely successful An Post Cycle Series made up of six sportives around the country in which 17,000 cyclists compete annually, many taking part in several events.

An Post also sponsors the national tour races for men and women –the Rás and Rás na mBan – and it is also the title sponsor of the Irish professional cycling team owned by Sean Kelly, An Post-Chainreaction.

“Cycling is definitely addictive, for many people who take it up it becomes a way of life,” says Aileen Mooney of An Post corporate affairs.

“You reach this critical mass and there are so many people doing it that it becomes mainstream. And I think that won’t be reversed.”

An Post was attracted to cycling because it was on the up while still small enough for An Post to play a lead role rather than compete for attention as a co-sponsor in a larger sport.

Mooney believes sportives are unique in that they offer participants the opportunity for a shared experience with friends and family while also enabling cyclists generate social capital if they choose to fundraise for charity while riding the events.

While many complain Ireland’s cycling infrastructure needs to improve, Mooney points to the progress so far.

“There has been a lot of progress with building the cycling greenways – the Deise greenway, the Great Western, the Wild Atlantic Way. And you see more things like cycle lanes now.

“There are a lot more cyclists on the roads now and that brings awareness and I think there has been an improvement in driver behaviour [towards cyclists].”

Cycling Ireland, the sport’s governing body on the island of Ireland, has seen its membership rocket.

The organisation’s chief executive Geoff Liffey believes the introduction of the cycle-to-work scheme was key to turning so many new people onto cycling.

“And once people saw a friend or colleague buying a bike, they’d ask them about cycling and pick up bits of advice; they become more perceptive and more likely to try it out,” he says.

However, Liffey says while cycling is undoubtedly booming, it was perhaps more obvious in major urban centres than elsewhere.

“There is still some social perception that if you cycle to work it’s probably because you can’t afford a car. It’s hard to know how much that would put people off, but there’s still an element of that.”

And Liffey says while the Republic is getting better at putting in place cycling infrastructure such as cycle lanes, we still lag far behind most of our European neighbours.

“Less than 1 per cent of our transport budget is spent on cycling. And that’s something we would like to see increased.”

He was “quite sad” to see how few children cycled to school now compared with the relatively recent past. The census in 1986, for example, showed that 50,648 children between 13 and 18 years cycled to school, plummeting to 6,592 in 2011.

Liffey believes perceptions the roads are unsafe, a need more for cycle lanes and other infrastructure such as securing locking areas for bikes has conspired with higher car ownership in a much more affluent Ireland than 30 years ago to reduce numbers cycling to school.

But he believes the boom is now feeding itself. “There wasn’t even one dedicated bike shop in the town I grew up in. You had to get a catalogue and order what you wanted, so it was fairly exclusive in that regard, especially if you were trying to get children into it.

“Nowadays, there’s a bike shop on nearly every corner. Before, if you wanted to read about cycling you had to seek out dedicated magazines from abroad. But now it’s all over the place.”