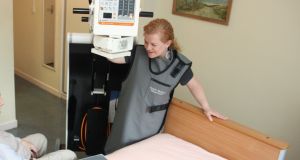 Mary Jones resigned her position as head of a busy department in a private hospital in 2017 to devote herself to a new business project that aims to introduce a mobile X-ray and diagnostics service to nursing homes.

The idea is simple; instead of dragging an often frail resident from the familiar environs of a nursing home to the busy and often chaotic emergency department for an X-ray test, why not bring the X-ray service to the client?

Jones has personal experience of these challenges. Her 86-year-old father, disabled and with Parkinson’s died shortly after Christmas last year, while her mother-in-law, with Alzheimer’s, died in 2017 at the age of 97. She accompanied both on many occasions to emergency departments when they needed tests.

“I witnessed the total disintegration of my mother-in-law’s cognitive function when removed from her normal environment. I also experienced huge logistical difficulties transporting my father and saw the strain placed on busy emergency medics in assessing him and catering for his physical dependency level.

“I thought - if we can send men to the moon why can’t we take an X-ray machine to the nursing home.”

A little research quickly showed that other countries were providing such a service. Norway, for instance, has been providing mobile X-ray services since 2005 for Alzheimer patients and now offers the service in most large cities for all nursing home patients, she says.

The idea of a transportable service is not even a new one - Marie Curie operated 20 mobile X-ray units a century ago on the World War I frontline, Jones says.

As well as Norway, she travelled to Boston and Germany to research the services there before setting up her business, Mobile Medical Diagnostics, over a year ago.

“We are the only country in Europe bar Norway and Sweden that can offer this service,” she says. “It benefits the public system as it reduces admissions to emergency departments and also reduces demand on ambulance service. It provides a better quality of service to our most elderly frail patients.”

There are other mobile X-ray services in operation, such as the TB testing offered to homeless people by Safetynet and the HSE, but Jones says patients have to get into a van to use them. Her service takes the machine to the bedside.

Using a mobile service protects patients from possible infection in hospital, as well as eliminating transport costs for patients. Hospital admissions are reduced, as at present some elderly patients are kept in hospital for observation while being assessed.

Jones says the radiation emissions are “very low” as the machine uses new digital technology. With a weight of 68kg, you wouldn’t be putting it under your arm but it can be easily wheeled into wards, and patients do not have to be moved from their rooms. The radiographer carrying out the tests wears a “lightweight” lead apron.