Some heroes don't wear capes, they wear shorts and runners

Dublin Marathon: for many, completing 26.2 miles is a means to an end – raising funds for worthy causes 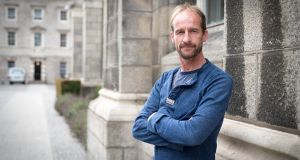 On Sunday, almost 20,000 men and women will line-up to take part in the 2017 SSE Airtricity Dublin Marathon.

Some are in it to win, more are taking part just to be involved.

For many, however, completing 26.2 miles is a means to an end – raising funds for various charities. Here’s what’s motivating some of those involved.

Paula Kerr will be taking part to raise funds for and awareness of children affected with Duchenne Muscular Dystrophy (DMD), a terminal muscle-weakening genetic disease. Paula’s oldest son Archie (11) and her twins Isaac and George (6) were all diagnosed with the condition.

Archie will also be participating in the marathon, using a running buggy pushed by a team of six runners from the Roscommon Harriers. The runners will be raising funds for a charity set up by Paula and her partner Padhraic, Join Our Boys, which raises awareness of DMD.

“It’s great that Archie was allowed to enter,” Paula said. “He’s absolutely sporting mad. It’s the hope to show even if you have a disability you can still aspire to what you set your sights to . . . He’s really excited, it’s really helped his confidence” she said.

Her son is involved with the local football club, and also plays drums.

David Carrie is a long-distance runner who competed in Irish and international races during his athletic career. On Sunday he will be participating in the marathon alongside a running group he set up to get people in his area more active. He started the Team Carrie Marathon Runners group in 2010 in his hometown of Dunleer, Co Louth.

Since then over 430 people from the town have completed their first Dublin marathon and have raised thousands of euro for various charities. “It’s something on the bucket list for a lot of people, so I set up the group to try and inspire people to take up running first, and maybe then decide to try run a marathon,” he said.

Barry Brennan, from Donabate, Co Dublin, will be running the marathon in aid of the Make-A-Wish Ireland charity for the second year running. “It was kind of on my bucket list and I was watching Netflix one evening and I kind of got the mad idea into my head to do it – and it just grew from there,” he explained.

“I have two healthy daughters, so I wanted to do something for people who aren’t as lucky,” he said. “Mentally my head went a bit last year [during the event] – this year the mental preparation has been as important as the physical,” he said.

Ten years ago, Jason Le Masurier was left partially paralysed after a kite surfing incident and was told by doctors he might not walk again.

He will run the marathon “to see how far I can go to prove the doctors wrong”.

Jason, who lives in Donegal, suffered a near-fatal brain injury while kite surfing. Three years ago he completed a triathlon, so he said the marathon is “another milestone on my recovery from being told I’d never walk again”. He is raising funds for the Irish Community Air Ambulance, based at Cork Airport.