Repairing and restoring: the secrets of sports massage

While many find a massage pleasurable, the timing is very important – and also whether you are carrying an injury 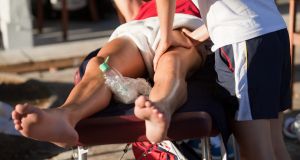 Sports researchers found many benefits from having a massage

Those whose resolve to get fit remains undimmed should already be reaping the physical and mental rewards of regular activity. But those aiming to boost their athletic performance should remember that heavier training increases the risk of injury.

A 2012 report in the British Journal of Sports Medicine stated that around 45 per cent of sports-related injuries derive from muscle strains and muscle trauma. Yet although skeletal muscle can repair itself, healing can be slow and injuries may recur. So how can we help avert skeletal muscle injuries and accelerate recovery from them? Factors such as training load, stretching and diet are important, but anecdotal evidence shows the value of massage therapy, which includes relief of muscle tension and stiffness, faster healing of muscle strains and ligament sprains, reduced muscle pain and enhanced flexibility.

Merrell brand ambassador Dr Andrew Murray has competed as an ultra-runner at international level, and is a sports and exercise medicine consultant to the European Tour Golf, the SportScotland Institute of Sport, and University of Edinburgh.

He told The Irish Times: “In pure performance terms, the things that make the biggest difference for running are to train adequately, and train smart; eat healthily – if it’s advertised on TV it’s probably bad for you; and sleep at least seven to eight hours per night. But beyond that,” he added, “many things may make a smaller difference. At a performance level, it’s common to see athletes receiving a massage – some of them call it a ‘flush’ – after a hard session, or to work out those aches and pains. Some people say it helps remove lactic acid, or release knots from muscles, etc and it can be valuable to aid relaxation, with many finding it a pleasant experience.”

Murray also highlights the small gaps between success and failure, noting that in the Olympics the difference between gold and fourth is less than 1 per cent, in which case sports massage may help bridge such gaps.

Raheny Shamrock AC’s Mick Clohisey, who represented Ireland in the marathon at last year’s Rio Olympics, uses massage in his training regime. “I have a regular physio,” he told The Irish Times, “and I find it beneficial to have somebody who gets to know my own body.” During heavy training periods Clohisey has a sports massage every other week, saying it is mainly for “maintenance and injury prevention”.

Clohisey – former Ireland cross-country champion – is clear: “I definitely think massage helps improve recovery and increases blood flow, which helps repair muscles after hard stress. However, I do feel that a too deep massage can be counter-productive at times and can leave your muscles sore for a few days. I generally try to get a massage on an easy training day and also a few days out from a race as opposed to right before. If you undertake massage regularly, the less intense it has to be, and your body becomes accustomed to it. I would also encourage drinking plenty of water post-session as you tend to become quite dehydrated.”

For those constrained by cash and/or time, a popular and relatively recent innovation is the use of foam rollers – basically, cylinders of firm foam. This entails an individual using their own body mass on a roller to exert pressure on affected soft tissues such as, for example, quadriceps, hamstrings, calf and gluteal muscles. In a review of the topic, published in the journal Current Sports Medicine Reports, nine studies were examined, with the authors concluding that the use of foam rollers as a massage tool “. . . appears to have a positive effect on range of motion and soreness/fatigue following exercise, but further study is needed to define optimal parameters (timing and duration of use) to aid performance and recovery.” In their general discussion of massage, while the authors cited “many gaps in the literature and inconclusive evidence on the benefits of massage”, they acknowledged that “Sports medicine personnel believe that massage provides many benefits to the body through biomechanical, physiological, neurological and psychological mechanisms.”

For runners considering introducing sports massage into their training schedules, Mick Clohisey offers this advice: “I would recommend not getting one too close to competition and also to rest afterwards or even take a light jog a few hours after, if possible, to ‘shake out’ the legs. In addition,” says Clohisey, “if you’re already injured, be careful not to aggravate an injury with massage. That’s were a knowledgeable, trustworthy physio is important.”

In recent years research has focused on whether massage following intense physical exercise may also benefit the immune system. For example, studies have shown that massage enhances the parasympathetic – or the so-called “rest and digest” – nervous system; increases both saliva secretion and the production of alpha-amylase, an enzyme involved in neutralising bacteria in the mouth; and “pushes” neutrophils – a type of white blood cell – away from sites of inflammation and back into the bloodstream.

These studies are cited by Dr Manuel Arroyo-Morales – of Spain’s University of Granada – and colleagues, whose report in the journal Physical Therapy in Sport (2015, 16: 187-192) describes their investigation, entitled “Immunological effects of massage after exercise: a systematic review”.

They evaluated five randomised controlled studies and found evidence that following intense physical exercise, massage produced “a significant and persistent” increase in the number of neutrophils circulating in the bloodstream and increased the production of an antibody called immunoglobulin type A (IgA), previously depleted as a result of intense exercise, with females showing greater concentrations of IgA than males.

The Spanish researchers suggest that the effect of massage on the immune system “may be influenced by various factors, including the attitude of the individual towards these procedures . . . or the use of specialised forms of massage such as myofascial release”. They further speculate “that massage may have a more relevant effect on the immune response after exercise with a higher cardiovascular demand [such as running]”.

The review also indicated that massage can influence immune responses at a local muscle level. For example, it cites a 2012 report whose authors studied biopsies taken from the massaged (on one leg) and non-massaged (the other leg) areas of the quadriceps muscle of the same individual. The biopsies showed that the massaged muscle showed lower amounts of two chemical indicators of inflammation, called TNF-alpha and IL-6. Since TNF-alpha can damage muscle fibres, then any reduction in markers of inflammation through massage should be helpful.

At present, while the evidence base supporting the benefits of sports massage is not as wide as one might assume, we might reasonably expect further clinical studies to expand it in time to come.