There’s an epidemic of fatty liver disease in this country, and teetotallers aren’t immune 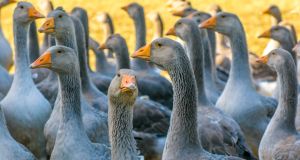 While fatty livers in geese might be desirable for foie gras, they pose serious problems for humans

If you have a low alcohol intake or you don’t drink, you are guaranteed to never get cirrhosis of the liver, right? Wrong – there is an epidemic of fatty liver disease in this country, with some of these patients progressing to cirrhosis and ultimately to liver failure.

I wasn’t aware of the growing prevalence of non-alcoholic cirrhosis until a conversation I had recently with Suzanne Norris, a professor of gastroenterology at TCD and consultant hepatologist at St James’s Hospital, Dublin.

She and her colleagues are increasingly seeing patients who have had diabetes for years, a fatty liver visible on an abdominal ultrasound, and mildly raised liver enzymes.

When they further investigate these patients, some of them turn out to have either cirrhosis of the liver or advanced fibrosis (a precursor to cirrhosis).

“All of these cases are unrelated to alcohol and entirely due to fat-related inflammation,” she said.

Prof Norris is concerned that the issue is flying under the radar of both doctors and the public. The European Association for the Study of the Liver published a detailed clinical practice guideline on this area last year, but awareness of the recommendations seems to be low.

Given the number of patients with early stage liver cirrhosis attending her clinics, she said she is increasingly concerned that we “liver people are not getting the message out about the potentially harmful impact diabetes has on liver health”.

According to the association, non-alcoholic fatty liver disease (NAFLD) is the most common liver disorder in western countries, affecting 17-46 per cent of adults. But NAFLD is also present in 7 per cent of people whose weight is normal; this is seen more frequently in younger females who have normal liver enzymes. However they too progress to fibrosis and cirrhosis.

NAFLD is characterised by excessive fat in liver cells; to make the diagnosis doctors must see steatosis (an abnormal accumulation of fat inside liver cells) in more than 5 per cent of liver cells using specialist MRI scans.

It includes two pathologically distinct conditions: non-alcoholic fatty liver, which carries a better prognosis; and non-alcoholic steatohepatitis, which covers a wide spectrum of disease severity, including fibrosis, cirrhosis and even liver cancer.

The very same habits that we know cause weight gain and obesity also cause NAFLD. So a high-calorie diet, excess (saturated) fats, refined carbohydrates, sugar-sweetened beverages, a high fructose intake and a western diet have all been associated with NAFLD. And it appears that a high fructose consumption may especially increase the risk of developing the nastier version of the condition involving advanced fibrosis and cirrhosis.

Just how much of a potential time bomb we are sitting on is revealed by recent data from the excellent Tilda research project. It shows that 36 per cent of the Irish over-50s population are classified as obese and a further 43 per cent are overweight; just 21 per cent of us have a normal body mass index.

But it’s not all doom. Prof Norris told me about a patient with diabetes and a high BMI whom she first saw in 2014. Back then he was scanned to see if he had liver fibrosis. “To our surprise and shock, he had evidence for cirrhosis as a consequence of NAFLD.”

“A non -drinker, he took my advice on board regarding weight loss and better diabetes control. Now two years later, he has lost more than 10kg, has normal glucose control, and on recent follow-up scan has mild fibrosis, the cirrhosis having been reversed as he has regained a normal BMI,” she said.

It’s not often in medicine we get to completely reverse disease. But this man’s determination to make lifestyle changes means he no longer has a potentially fatal condition. It shows our foie gras livers can have a healthier future.

Meet the Bearman of Buncrana: ‘I knew about Joe Exotic for years’
7

Bar soap vs liquid: Which is better for the environment?
Real news has value SUBSCRIBE