Did pre-wedding bodybuilding cause my deep vein thrombosis? 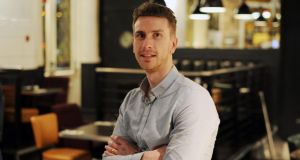 Vincent O’Brien: bought supplements online from what appeared to be a reputable company, only later to learn that the supplement industry, especially in bodybuilding, is poorly regulated. Photograph: Aidan Crawley

The plan was to get himself in good nick for his wedding, maybe put on some proper upper body weight. The last thing Vincent O’Brien suspected was that he would end up in hospital with a potentially fatal timebomb ticking just inches away from his heart.

“It was meant to be the most special week of my life on honeymoon in Portugal,” he tells me. “The timing was super bad but I know I was lucky in other ways. What if we’d gone to the Seychelles or Vietnam, where we were actually thinking of going?”

Now, just over a month later, he is still trying to make sense of it all. Aged 34, he had always considered himself relatively healthy – no longer smoked, no allergies, no medication and no warning signs within the history of his family – which made the sudden and severe onset of deep vein thrombosis (DVT) in his right upper chest all the more worrying, partly explaining why he initially ignored it, too.

About six months out, determined to look his best on the day, O’Brien began some heavy weightlifting known as the “5x5” programme, popular since Arnold Schwarzenegger’s time, designed to maximise strength and muscle growth within a short period (using short reps and short sets of heavy weights), deadlifting 112kg, things like that.

“I had always been interested in bodybuilding, figured this would get me in top shape for my wedding. Because of my job in web design, I’m mostly sedentary, sitting down for 10 or 12 hours a day, and wouldn’t get much other exercise, especially cardio. So I started the weight programme, three nights a week in the gym, for six months.

“To maximise the results, I also started taking supplements, mostly whey protein, also some pre-workout formulas, post-workout, which contained things like caffeine, creatine, glutamine, that kind of stuff. A lot of them were recommended to me by friends or people at work so I just went ahead and took them.”

He bought them online, from what appeared to be a reputable company, only later to learn that the supplement industry, especially in bodybuilding, is poorly regulated.

Contamination with traces of anabolic steroids, inadvertently or otherwise, is not uncommon. Still, straight away he started to see results and he stuck with the programme until just before his wedding in Belleek Castle, Co Mayo.

“The week before I’m on my stag, also in Portugal and, when I pull off my shirt at the swimming pool, one of my mates says he can’t believe how ripped my muscles look, which, of course, I thought was great. We did the usual late-night drinking, nothing too wild, then I left on the Sunday, six days before the wedding.

“So we get through the wedding, happy out, and on the Monday Caroline and I fly back to Portugal for our honeymoon, or ‘mini-moon’ as we called it. We just didn’t have the time to go somewhere long-haul far away.”

This was the first blessing in disguise, because by then, what turned out to be a 5cm clot was already forming inside his right brachiocephalic vein in his upper chest, the major vein that returns deoxygenated blood to the heart. Had he got on a long-haul flight to the Seychelles or Vietnam, the risk of a pulmonary embolism, where the clot breaks loose and lodges in the lungs, blocking blood flow, would have been significantly greater.

Still, O’Brien was about to get a major scare. They had booked a nice apartment in Vilamoura and on the Tuesday morning he took a dip in the pool, only to discover he couldn’t raise his right arm over his head. It was noticeably swollen and purple, too, so they got in a cab and went to the local doctor’s clinic.

“He looked at my arm and straight away I could tell it was serious. After a quick inspection, he tells me to go straight to A&E, in Faro, which was another 35km cab ride away. We’re definitely freaking out at that stage and still have no idea what’s going on.

“The doctors in A&E do all sorts of tests – X-ray, ECG, CAT scan, ultrasound – look at my bloods, and everything looks fine, and, after all that, they eventually tell me I had a deep vein thrombosis, a 5cm clot, and they were super concerned about it.

“Eventually after about six hours I get a room, the nurse puts a drip in my arm and I get an injection of heparin, the strong blood thinner, into the stomach. And I’m left there, to wait, thinking this clot could slip into my heart or lungs at any moment.

“And that’s when I lost it, broke down in tears with Caroline, thinking that all the things we’d talked about, having a family, were suddenly now in jeopardy.

“The next four or five days, the doctor said, were critical, and that’s when we tried to piece together the causes. It turned out he had actually dabbled in bodybuilding himself and explained that incidents of DVT were commonly associated with heavy weightlifting, especially with supplement use. He asked me did I take steroids and I said definitely not but that’s when he explained the potential for contamination too.

“The weightlifting, the supplement use, the possible contamination with a steroid or some clotting agent, weren’t the only cause, but he reckoned [they were] the number one factor. And, when combined with the stress of the wedding, being dehydrated from the stag and my mostly sedentary lifestyle, that’s what brought it on.

“Of course I’d heard of DVT, but always associated it with older people, mostly overweight, so this was a complete surprise to me.”

“It has been a life-changing experience, for sure. I’m not religious but I reasoned with someone during those days in hospital, myself included I suppose, to make changes in my life if I got through this. I’m not out of the woods yet and I’ll be taking Rivaroxaban [another blood thinner] for three months, maybe longer.

“My doctor here says there’s a less than 1 per cent of a repeat DVT and I should be fine to resume normal activity, even weightlifting – but it’s another warning about the dangers of heavy lifting, combined with supplement use. I thought I was invincible, at the peak of my happiness, when DVT struck, so it’s important to know the warning signs of that. I’ve already made same changes, I get less stressful about the small things, try to eat and exercise with a more balanced approach. It has also brought Caroline and me closer together, even if it did happen at the worst time possible, on our honeymoon.”

How wearing a face mask affects the impact of exercise
9