Centenary of a physician who taught students to be compassionate 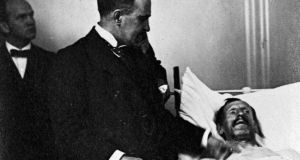 This month marks the centenary of the death of Sir William Osler (1849 - 1919), widely regarded as the pre-eminent physician of the 20th century. He taught his students to be compassionate; as an educator, he revolutionised clinical teaching.

Born in Ontario, Canada, Osler graduated from McGill University School of Medicine in Montreal. After some time in Europe, he was appointed professor at McGill. But it was at the newly formed Johns Hopkins Hospital and Medical School in Baltimore that he settled and here Osler seized the opportunity to establish new standards for the teaching of medicine in the US.

Osler left a huge written legacy of more than 1,600 papers, essays and books. Many contain principles and precepts written in an aphoristic style, which have influenced generations of doctors. Here is a small selection of his axioms:

On maintaining a good humour: “Hilarity and good humour, a breezy cheerfulness, a nature ‘sloping towards the southern side’, as James Russell Lowell has it, help enormously both in the study and the practice of medicine. To many of the sombre and sour disposition it is hard to maintain good spirits amid the trials and tribulations of the day, and yet it is an unpardonable mistake to go about among people with a long face.”

But whatever you do, take neither yourselves nor your fellow-creatures too seriously

Do not take away hope from the patient: “What is your duty in the matter of telling a patient that he is probably the subject of an incurable disease?... One thing is certain; it is not for you to don the black cap and, assuming the judicial function, take hope from any patient – hope that comes to all.”

Don’t take yourself or others seriously: “But whatever you do, take neither yourselves nor your fellow-creatures too seriously. There is tragedy enough in our daily routine, but there is room too for a keen sense of the absurdities and incongruities of life, and in the shifting panorama no one sees better than the doctor the perennial sameness of men’s ways.”

Which brings us to the question of Osler’s relevance today. Are his aphorisms still useful in guiding doctors to look after patients to the best of their ability? It’s a question addressed in the current issue of the Postgraduate Medical Journal, which is entirely devoted to his centenary.

Edited by GP and medical educator Dr John Launer, it offers different perspectives on Osler, his continuing impact on contemporary medicine and his humanity as a doctor.

Launer writes that it takes little imagination to transpose Osler’s comments on equanimity into the 21st century. “Which of us does not know a doctor who is impatient with lay beliefs, unaware of their own shortcomings, consumed with anxiety by challenging cases or life events, seduced by success or haunted by the risk of failure?”

But changed times require new concepts, and Launer wonders if Osler would now consider replacing imperturbability with the concept of reflexivity – reflecting the different relationships that today’s doctors have with their patients.

Reflexivity refers to the capacity to examine your own feelings, reactions and motives, so as to calibrate your utterances and actions continually in response to what you observe.

Launer says “it might be entirely right to display a calm and measured manner with one patient, but more beneficial to allow oneself to become animated and expansive with someone else, or even with the same person at another time.”

I wonder might the empathy inherent in reflexivity become a “wisdom of tomorrow”?