Celebrity doctors: the perils of treating the famous

Medical Matters: Were blurred professional boundaries a factor in the deaths of Elvis and Michael Jackson? 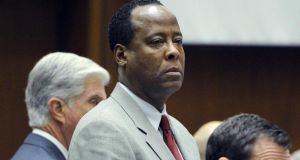 Dr Conrad Murray, who was found guilty of involuntary manslaughter, at his trial in 2011 in connection with the death of pop star Michael Jackson in Los Angeles. Photograph: Kevork Djansezian/Reuters/Pool

The recent death of Elvis Presley’s personal physician is a reminder of the niche practices of celebrity doctors. Especially prevalent in Hollywood, these practices offer concierge services, including round-the-clock availability for house calls; a willingness to fly off to meet their travelling patient at a moment’s notice; and a room service-style prescription drug delivery service. While no additional degree or special licence is required, these doctors’ practices are tailored to those living in the celebrity world.

It’s a well-renumerated speciality. The late Michael Jackson’s doctor was allegedly paid $150,000 a month for his role as the pop star’s personal medic. But, in addition to the significant earnings, a number of doctors to the stars have experienced significant legal and regulatory problems.

Nichopoulos worked with the singer full-time from 1970 until Presley’s death. Presley was 42 when he was found on the floor of a bathroom at his Memphis home, Graceland, on August 16th, 1977.

At the time of his death, Presley had 14 different prescription drugs in his system.

The Tennessee Board of Medical Examiners found Nichopoulos guilty of overprescribing medication and suspended his medical licence for three months. In 1980, the doctor was indicted on 14 counts of overprescription of drugs to Presley, singer Jerry Lee Lewis, and several other patients. The drugs included amphetamines, narcotics, barbiturates, tranquillisers and sleeping pills.

In a 2009 interview on NPR following the death of Michael Jackson, sociologist Prof Karen Sternheimer of the University of Southern California said of celebrity doctors: “I think that there is this really intoxicating effect of being around somebody who is as famous as Michael Jackson was, that it becomes really difficult to possibly risk severing that relationship.”

Some celebrities are undoubtedly narcissistic and manipulative. This and the person’s fame can upset the usual doctor-patient dynamic. Professional boundaries may be blurred, with the normal prescribing power of the doctor, carried out to strict professional tenets, being in some way subverted by the fear of losing a high-profile patient.

In Michael Jackson’s case, the Los Angeles County coroner said the powerful anaesthetic propofol and the sedative lorazepam were the primary drugs responsible for Jackson’s sudden death at the age of 50.

According to evidence given at the trial of his doctor, Conrad Murray, the pop star had great difficulty sleeping. The occasional use of sleeping tablets having failed, Jackson requested much stronger medication. He was subsequently administered the intravenous anaesthetic agent propofol.

The use of propofol outside an operating theatre, emergency department or intensive care unit is highly unusual. Without the use of a blood pressure and heart rate monitor, along with devices to check the level of oxygen saturation in the blood as well as a person’s breathing, it is difficult to see how any doctor could justify its use outside the hospital setting.

So how could Murray use propofol in this way? Partly because, according to testimony during the trial, Murray stayed with Jackson at least six nights a week and was regularly asked – and sometimes begged – by the singer to give him drugs powerful enough to put him to sleep.

It’s a racing certainty that had Murray and Nichopoulos maintained appropriate professional boundaries with their celebrity patients, their care would not have taken the same route.

The best places for a family lunch: try these 10 great spots
6