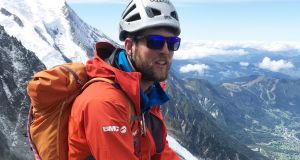 France-based Paul Swail comes home to guide across Ireland regularly, but most of his work is done around the Alps

Living in “the best place in the world” didn’t happen by chance for Paul Swail, who settled in Chamonix at the foot of Mont Blanc – capital of alpinism, skiing and sports climbing – in 2017.

Born in Vancouver to Northern Irish parents, Swail’s family moved back to Newcastle, Co Down, when he was 12.

“We came back in 1995 and my dad and I used to walk in the Mourne mountains,” he says. I had skied in Canada, but really got into the mountains back home.”

After a family friend took him climbing at a disused quarry, he was hooked. “I joined a youth club and I met like-minded people with shared interests. We all worked odd jobs to fund climbing. It defined all of our decisions,” he says.

“We’d go climbing all around Ireland, sleeping in our car by night and climbing by day. It was so carefree.”

Once he completed school, Swail studied outdoor education at the University of Central Lancashire, at the Lake District in the UK, between 2001 and 2004.

During holidays and post college, he worked at the Tollymore National Outdoor Centre in Newcastle, which offers training courses in outdoor education, mountaineering, climbing and watersports.

Once he completed college, his time was split between training jobs back home to climbing big walls in Yosemite National Park in California and skiing in the Alps.

Swail completed numerous winter seasons in the Alps, in Courchevel and Serre Chevalier in France. “I did a lot of ice climbing, ski touring, backcountry skiing and indulged in a lot of winter sports by day, working in bars at night.”

Between 2010 and 2014, he took up a job as a youth development officer for Mountaineering Ireland, where he taught young climbers the importance of enjoying the mountains responsibly and safely.

He started playing a key role in the promotion of climbing in Ireland, and co -organised the Fair Head Climbing meet, securing Alex Honnold as the guest speaker in 2016. Honnold went on to free solo (climbing without a rope) El Capitan in Yosemite, winning an Oscar for the documentary about the feat.

During his time in Ireland, he became a guide with the International Federation of Mountain Guides Associations.

“It is the highest recognised mountaineering qualification in the world. It’s the only qualification valid to work outside the UK and Ireland for climbing and off-piste skiing on glaciated terrain.”

Swail admits that few people at home really know what mountain guides do. “They’re not taking scouts for a walk in Glendalough,” he says. “The training is intense. You’re trained by the best in the world, not just in endurance, but also in human psychology. You need to be able to manage people’s aspirations with reality. You learn about yourself. It’s a very serious environment. It’s dangerous and you’re not taking someone for a hike.

“There are so many variables – the weather, ice, seracs, crevasses, avalanches – and when you bring clients into the mountains, it’s life or death and you need to know what you’re doing and be able to manage risk.”

Swail has ascended Mont Blanc many times, climbed the Mitteleiger route up to the summit of the Eiger, the Matterhorn, unofficially ascended on El Capitan in Yosemite, and established new routes in Patagonia.

Since moving to Chamonix with his wife, a place Swail describes as the “mythical centre of Alpinism”, he has been guiding full time.

“I tailor-make trips for clients, who mostly come from Ireland. Some want to mountaineer, others want to go climbing, touring or ice climbing for a day or often several days. Chamonix is a playground for that. Currently, I’m chatting to a client who wants to climb Mont Blanc.

“I love to introduce and inspire people of all ages to the mountains and cliffs. I create bespoke guiding packages for people, tailored to their ability and aspirations, allowing for flexibility in their itinerary and the opportunity to fulfil a dream or overcome personal challenges. I also need to ensure people know that due to different circumstances, a summit may not be reached, but an amazing time will be had regardless.”

Swail comes home to guide across Ireland regularly, but most of his work is done around the Alps.

As for living in France, Swail says there is a lot of red tape. “They won’t make it easy for you. Luckily, my wife has excellent French, which helped with the bureaucracy. I speak French, too, which I strongly advise to people looking to move here. People don’t earn as much here, yet costs are high. If you want to live in the centre of Chamonix, you pay Dublin prices, but you don’t earn Dublin wages.”

Swail says most of the Irish living in the region are also mountain fanatics, either working seasonally, with just a handful of prestigious guides.

Like everyone else, he has been affected by Covid-19. “Though I can officially guide during Covid-19, I don’t have any clients yet as quarantines are still in place, but luckily I can spend my days rock climbing. It’s a great life no matter what time of year. You’ll never tire of the mountains.”