Why can’t eligible emigrants be included in postal vote?

Up to 60,000 Irish abroad could potentially cast ballot in same-sex marriage referendum under existing law 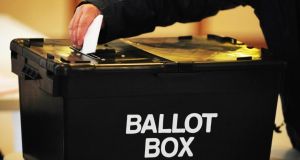 Unlike students living away from home, prisoners, Gardaí based overseas or people whose line of work prevents them from voting at their local polling station, Irish emigrants who are still eligible to vote under existing electoral law cannot avail of the option of a postal vote. Photograph: Rui Vieira/PA Wire

Under Irish electoral law, emigrants retain their right to vote for a period of 18 months, provided they plan to return home within that timeframe. According to CSO figures, upwards of 60,000 emigrants could potentially vote in the same-sex marriage referendum on May 22nd.

Our legislation is amongst the most restrictive in Europe regarding an overseas vote, but those who have recently left - the majority of them young and abroad for work - can still participate in referenda on condition of their stated intention to return home.

But despite Government commitments on emigrant engagement and a new diaspora policy, nothing is being done to facilitate these people voting. Tomorrow is the close of registration for a May 22nd postal vote, but unlike students living away from home, prisoners, Gardaí based overseas or people whose line of work prevents them from voting at their local polling station, Irish emigrants eligible to vote cannot avail of this option.

Instead they must seek time off work and purchase expensive flights home. Both are a considerable barrier to exercising their democratic right, particularly for those living in America, Australia, Canada or New Zealand.

Although more than 60,000 emigrants could potentially return to vote, the actual number will certainly be much lower because of this financial constraint. Our outdated electoral system will accommodate only those with sufficient means and this will directly impact the Yes campaign: research shows the majority of recent emigrants fit the key demographic supporting marriage equality.

As Irish citizens who campaign for emigrant inclusion and encourage those eligible to return home to vote to do so, it’s clear that more should be done by Government to represent these people. At the very least, access to the postal vote facility should have been extended, so that those Irish citizens overseas with a very clear stake in the outcome of this referendum could have had their say in it. That many will not is a great shame.