What’s it like to work as an Irish translator in Brussels? 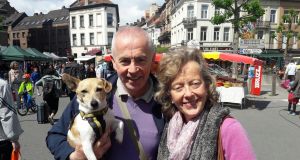 ‘As empty nesters, we felt it was a chance for us to make a fresh start and to leave our respective comfort zones.’

The EU is hiring 62 new Irish translators to work in Brussels and Luxembourg. PJ Mac Gabhann, who took up one of the posts in March, describes what the job is like.

In his Foclóir Gaedhilge agus Béarla, Pádraig Ua Duinnín writes: “aistrighim, (verb, transitive and intransitive) I alter; translate; change residence”. How appropriate is this in my case. I translate and, in order to do so, I have changed residence.

In 2007 I had just taken up a job in the Language Centre in Maynooth University. Irish had been made an official working language of the European Union at the start of that year and the move was on to train and recruit translators in order to take up the positions in Brussels and Luxembourg as they arose. The basic job requirements were straightforward. Applicants had to be a citizen of the EU, have a third-level qualification, and a proven competency in at least three EU languages with Irish as one of them.

Work took me to France in 2008. For three years I worked to improve my language skills in French by attending class and sitting the DELF/DALF examinations. During that time I also did an online postgraduate diploma in translation and editing from the university in Maynooth. Slowly, inevitably almost, the idea started to form that maybe, someday, I might end up in Brussels as a translator.

I was brought back to Ireland in 2011 when I was offered a position as a research editor in Fiontar in DCU in May of that year. For three years I worked on the school’s Irish language terminology project for the European Union, covering topics such as asylum and immigration, climate change, roaming mobile charges, human trafficking, and the economic crisis.

So in 2014 when a selection procedure was announced to recruit Irish language translators on temporary contract for the European Commission, I was happy to send in my application. And I was even happier to be offered a position, as I felt that the work and the career choices in the past had paid off.

I moved from Dublin to Brussels at the end of February this year and I started work in DG Translation at the European Commission on March 1st.

Moving to Brussels was not an easy decision for my wife and me to make. To uproot ourselves from our home, family and friends in Ireland and to find accommodation in, and settle into, a city we only vaguely knew was a challenge. And we did feel vulnerable in Brussels as the city went on lockdown soon after we arrived in March due to the attacks on the airport and metro. It felt strange to sit in the office that day and listen to the sirens of police cars punctuate the passage of time.

As empty nesters, we felt it was a chance for us to make a fresh start and to leave our respective comfort zones. We are not ready to retire just yet! And because we live and work in an environment where we are cheek by jowl with people from 28 EU countries, events such as Euro 2016 and Brexit take on an enhanced relevance.

The opportunity to work as an Irish language translator and to live in Brussels gives me the chance to further hone my language skills. The documents we have to translate are often complex, both linguistically and in subject matter. The late Séamus Brennan’s advice to members of the Green Party as they entered negotiations with Fianna Fáil to form a coalition government in 2007 resonates with me as I work my way through the texts. Like the Greens, I feel I have been given the chance to play senior hurling and that, luckily enough, I have colleagues around me who hold All-Ireland medals. In truth, I am doubly fortunate in that many of my colleagues have that spark of youth and enthusiasm, allied to a belief in the work that we do, which energises all around them.

More importantly, I feel the Irish language itself will benefit from its improved status in Europe. With Irish as an EU official working language since 2007, the increased opportunities for graduates with Irish language skills to work in translation or in the related fields of lexicography and terminology development alongside language technology are to be welcomed. That in itself is important.

Moreover, these developments add to the relevance and growth of the language in the 21st century and prepare Irish for future generations.

How blessed am I to be part of all of this?

The European Personnel Selection Office is currently looking to fill up to 62 positions for Irish-speaking linguists based in Brussels and Luxembourg. Applications can be made via jobs.eu-careers.eu until July 12th.