Twenty-two years have slipped by. I love my life and I am content with the decision I made 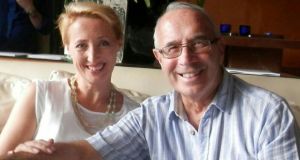 Cathy Tobin: ‘My last day in Ireland, as I did the rounds to say goodbye, felt a lot like my last on earth. I was willingly dropping out of my entire life, all my relationships, and everything that was familiar to me.’

I was 23 in 1993, and “lucky” to be employed. I didn’t feel lucky; I hated the job, but knew I couldn’t leave it and be guaranteed another. Driving to and from work in the dark was wearing me down.

My mother had moved to Florida after my parents separated, to stay with family who had preceded her by a few generations. On every visit she asked me to join her there, and one day, as I made my way home in the black and rain, wipers sloshing and headlights blinding me, the thought of sunshine and a fresh start finally became too much to resist.

The next morning I booked a flight and met Tom, my boyfriend of six years, for lunch, and told him my plan. He was welcome to come with me, I told him, but if he didn’t want to, I’d understand.

The single-mindedness with which I made my decision became less certain as I drew nearer to my departure date. My darling grandmother, in her late 80s, became ill, and I realised that when I left I’d be leaving her forever.

Strangely, for that time, emigration was a rare occurrence in our group. Most hadn’t left Cork, much less Ireland. My friends thought I was courageous, and a bit mad. I gave notice at my job, sold my car and whittled down my worldly belongings to fit into two suitcases.

My last day in Ireland, as I did the rounds to say goodbye, felt a lot like my last on earth. I was willingly dropping out of my entire life, all my relationships, and everything that was familiar to me. Increasingly, the vague promise of opportunity and adventure seemed a queer gamble. It takes a degree of desperation, and a large leap of faith to resolutely leave your home; and though I felt all those things, I still doubted my choice every minute of that day.

Having said goodbye to my friends and wider family I drove to my father’s house. He could see my distress and suggested we take a walk. He spoke of the power of youth and opportunity, and the importance of being brave. He projected for me what a future in Ireland would look like; many more years of driving in the dark to a job I hated, always knowing I hadn’t embraced the chance of something better. I knew I had to go.

The next day I got on the plane, sobbing so much I wondered how they let me board. In 1993, the sight of heartbroken youngsters boarding planes to America was likely nothing new to the staff at Shannon Airport.

My mother’s excitement when I landed in Tampa helped lighten my mood, as did the blue skies and sunshine. There was no internet at that time, so I kept in touch with Cork through expensive weekly phone calls and much anticipated letters. Tom was my best correspondent. He had decided to join me, but had to go through the visa process, which would take months.

My brother called three weeks after I arrived to tell me our grandmother had died. I never felt so alone. I listened to my Christy Hennessey tape and cried into the pillows on my king sized bed. I missed her funeral and all the support that family gives each other to get through loss like that. How could I have left?

As time went by I began to settle in to American life. Until my green card came through I couldn’t work, so I had ample time for reading and sunbathing. It wasn’t a hard life, but it still seemed so foreign. There was no walking anywhere. There was drive-through everything. There weren’t neighbours in the way I’d experienced them in Ireland; people were cordial, but uninvolved. Religion was not a personal issue; Jesus bumper stickers abounded. Everyone drank coffee, and if you asked for tea it came in a tall glass with ice.

My mother had two Irish friends. One was a housewife from Waterford, married to a Jewish doctor, and lived close by. The other, from Dublin, lived a good drive away, worked full time as a house cleaner. The unlikely trio got together every couple of weeks to share a drink and a laugh.

Americans had a different idea of fun, and a different sense of humour. Irish people who wouldn’t necessarily be friends at home became thick as thieves. The shared humour and history was the bond. I saw this happen repeatedly over the years. When you are far from home, the similarities you find in people from your side of the Atlantic are far greater than the differences.

In time, Tom came, and we moved to Orlando. My mother thought it would be a better city for us to start out in. We got jobs in Irish pubs downtown, and Tom took a second job clearing building sites - all boots and machetes, watching out for snakes, poisonous spiders, and alligators - a far cry from his Cork life.

A year passed and I was ready to call the experiment to a close, but Tom was hooked on sunshine and blue skies. He loved America. He had become enthralled with the idea of making a new destiny for yourself, as opposed to following a well-worn, somewhat pre-determined path, as is often the case in Ireland. So we decided to stay a while longer, and try on some new careers.

I went through Montessori teacher training, while Tom made money hand over fist in the bar. Soon we had enough to open our own restaurant with a couple of friends. When people tell you never to put money into a restaurant, listen. We struggled while our counterparts in Ireland were enjoying the boom of the Celtic Tiger. They bought lavish houses while we still rented an apartment. We worried about the long term financial ramifications of our choice, but stayed the course.

We clung a little closer to our countrymen abroad. We ran into two kinds of Irish people in America: the kind who would instantly go to bat for us, solely based on our shared motherland, and those would happily fleece us because of the very naive trust engendered by the first category.

We licked our wounds and agreed we’d go home when we were ready to start a family, but that time came, and we didn’t leave. We promised ourselves we’d go home when our first child was school aged, but we didn’t. Instead, we bought a house and Tom went to the Fire Academy.

Twenty-two years have slipped by and my two suitcases have expanded exponentially. Now we are a house, three children and long teaching and firefighting careers committed to our American adventure. We’re both American citizens and it doesn’t look as though we’ll ever move back, though we still call Ireland home. We are welcomed home by immigration officials on both sides of the Atlantic.

Our children, now in their teens, see the romantic view of Ireland on holidays in West Cork, rather than while walking to school in the cold and dark. They often ask us why we ever left Ireland. I still have to stop and think about that. I left because I needed to see what would happen if I did. My “what if” now revolves around what would have happened if I hadn’t gone.

I love my life, and I am content with the decision I made. But wherever I am, I will always have one foot in another country, and I’m never truly home. That was the real choice I made when I emigrated.