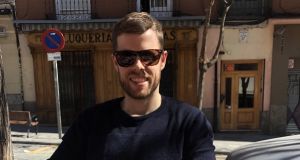 Brendan Boyle is originally from Tralee, Co Kerry but now lives in Madrid, where he lives with his girlfriend Larissa in the city before it shut down

Brendan Boyle is originally from Tralee, Co Kerry and now lives in Madrid with his girlfriend. He  works in corporate communications.

Life in Madrid is lived on its streets in its thousands of bars, cafés and restaurants across the city, and in its markets and at its newspaper kiosks. It's the barman who knows you want your coffee in a glass and your croissant a la plancha. It's the jovial characters at the fruit and vegetable market bearing the signs of too many summers in the scorching heat, who know that you´ll buy 4kg of oranges this week because you didn’t come last week. It's the shouting of orders, the shuddering crashing noise as plates and glasses and spoons are laid across the countertops, the hammering of the coffee portafilter, the steam rising.

Madrid has a distinct, unmistakable noise. That noise is its life. And right now, the city is desolate

As a Kerryman, moving to Madrid was quite the change, especially given the fact I had never previously visited the city. I had been learning Spanish as a hobby in Dublin, and decided for a new challenge and a change of pace in the Spanish capital.

Madrid has a distinct, unmistakable noise. That noise is its life. And right now, the city is desolate. It has been brought to its knees by a virus that originated almost 10,000km away.

It’s quite startling how quickly things can change. A state of emergency was declared by president Pedro Sánchez on March 15th and, already, standing in a queue 1m behind and 1m ahead of the next person to enter supermarkets almost feels normal. Only one family member is allowed into many establishments at any one time, and most now wear masks and gloves.

We have passed the panic-buying stage, but supplies still remain low. It’s a jarring sight to enter a supermarket at 10am to find many shelves completely empty.

Gran Vía, the most iconic street and heartbeat of one of Europe’s most vibrant cities, remains lifeless. Metros and buses continue to operate, many completely empty.

At a time when it felt that Spain had, at last, been released from the stranglehold of “la crisis”, it looks like the Mediterranean country could be plunged into yet another period of economic turmoil, crippling another generation. The high rate of temporary contracts is still a huge concern for the Spanish government and, if lockdown extends to a month or longer, it is estimated that between 2.5 and 3 million jobs will be affected.

The effect of this pandemic on Spain will be utterly crippling. Tourism alone accounts for 12 per cent of overall national GDP and, as the situation looks certain to extend well into May. Summer 2020 could very well be completely wiped-out as a tourist season. Spain was visited by a record 83.7 million tourists in 2019, bringing the country to seven consecutive years of historical highs. This year will put an end to that run.

And that’s without mentioning the cancelling of Semana Santa (Holy Week) and Puente de Mayo, a four-week period during which internal tourism booms, especially in cities such as Seville and Malaga.

Spain’s free healthcare system is generally excellent. There is no €50-odd fee for visiting your local GP and government-subsidised prescription medicine is usually exceptionally cheap even in comparison with the low salaries here.

However, hospitals appear to be approaching breaking point. Last week , Severo Ochoa hospital in Leganés, a satellite city in the southern part of the Comunidad de Madrid, announced it would not permit the entry of any more patients.

The number of deaths here continues to multiply by the day. In recent days two Civil Guards, both under the age of 40 and without previous health complications lost their lives.

Questions have been asked regarding the difference in death rates resulting from the virus between Spain (4 per cent and Germany 0.2 oer cent). More efficient testing in Germany and social factors such as the high rate of people between the ages of 21 and 39 still living with parents here in Spain have been cited as possible reasons. Salvador Illa, the Spanish minister of health has warned, “The worst days are coming.”

El País newspaper reports how the intensive care units in Madrid hospitals are bursting at the seams. The army have set up a makeshift hospital with a 5,000-bed capacity at the exhibition and events centre IFEMA, recently home to the UN Climate Change Summit.

Every night at 8pm, locals come out to their apartment balconies to clap and sing and show their appreciation for the tremendous efforts of Spain’s exhausted medical staff.

Spain is a country which lives off the energy of its daily interactions, its fiestas and ferias, even its fútbol, and the next few months will hit many hard

The vast majority of people in the urban areas of Spain live in pisos, small apartments, and for many this five-minute window of solidarity is their only interaction with the outside world. As the days and weeks go by it will become tougher for those who have no company, whose social life revolves around the local bar and shops. Families with small kids living in these small spaces also face testing times.

“Never,” my local butcher Juan said when I asked if he had ever seen anything of the likes before. “At least we have taken relatively quick action here. Not like that clown in London.”

Normal life will eventually return to Madrid, but right now we have no idea when. It could be anything from a month to three months, or longer.

Madrid is a city with stunning architecture, fantastic food and enough cultural activities to keep people coming back for years. But Madrid without its people, without that noise of the daily grind is a sad place.

Spain is a country which lives off the energy of its daily interactions, its fiestas and ferias, even its fútbol, and the next few months will hit many hard, both economically and psychologically. The effects of widespread job losses in the coming weeks will be felt for many years to come.

As seen in China, Italy, Spain and now Ireland, this virus is no joke, it is very real and the only way to combat the spread and to minimise the number of deaths, because there will be many more deaths, is to be proactive, not reactive.

Don’t wait until a loved one is sick to take this thing seriously. Avoiding unnecessary travel and contact with others will stop the spread.

It’s times like this when you miss the simple things back home: sitting outside Nick’s coffee shop in Ranelagh watching the world go by, watching a movie in the IFI, or sitting up on the high stool watching a match. I’m looking forward to the next trip home in June, all going well.

#QuedateEnCasa (Stay home) is the message here on social media and people are taking it very seriously. It’s time for Ireland to do the same.

If you would like to share your experience of how Covid-19 is affecting you there, email Irish Times Abroad at abroad@irishtimes.com