The closer the ties to Ireland, the less likely people are to back Trump

US election poll gathered 5,000 responses over 7 days on irishtimes.com 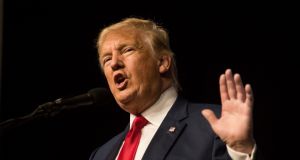 The closer the ties to Ireland, the less likely respondents were to vote for Trump with just 17 per cent of Irish-born respondents saying they would vote for the Republican compared with 42 per cent with “no connection” to Ireland who preferred him as a candidate. Photograph: Theo Stroomer/Getty Images

One of the most striking aspects of a poll of Irish Times readers on whether they would vote for Hillary Clinton or Donald Trump is how closely they reflect many US opinion polls.

Among 794 people who can cast a vote in the November 8th presidential election - out of almost 5,000 “virtual votes” cast from 85 countries in the online survey - 48 per cent would pick Clinton as their next president and 41 per cent said they would vote for Trump.

This is not far off the Real Clear Politics average of polls that puts the Democratic presidential nominee ahead of the Republican by a 48.1 per cent to 44.3 per cent margin and weighted more towards Clinton because it covers more of an overseas audience.

Overall, including the responses of non-US voters, an overwhelming majority, two-thirds, would back Clinton, while almost seven in 10 believe she will be the next US president.

The Irish Times survey found a low level of support for third-party candidates: 5 per cent for the Green Party’s Jill Stein and 3 per cent for Libertarian nominee Gary Johnson, bucking a trend in other polls that puts Johnson ahead of Stein by about five points.

While the self-auditing survey is by no means scientific, the poll throws up some intriguing though not unsurprising findings about the views of Irish and Irish-Americans.

The closer the ties to Ireland, the less likely respondents were to vote for Trump with just 17 per cent of Irish-born respondents saying they would vote for the Republican compared with 42 per cent with “no connection” to Ireland who preferred him as a candidate.

Among respondents who identified themselves as “undocumented,” just 23 per cent preferred Trump, pointing to the unpopularity of his immigration policies, particularly his inconsistencies on how he would treat those people living illegally in the US as president.

The survey matches the findings of other polls in other areas: Clinton performs better among women but is not as popular among younger voters. The Democrat has struggled to win over millennials, voters that swung strongly for her primary opponent Bernie Sanders.

Almost eight in every 10 female respondents backed Clinton in the poll, while just six in 10 men support her. Most responses in the survey, seven in 10, came from men.

A state-by-state breakdown of 566 US-based voters across 46 states shows close races in the battleground states with Clinton edging it slight in Florida and North Carolina, and trailing Trump in Ohio, again reflecting the average of polls in those important swing states.

Clinton was the preferred candidate among 58 per cent of respondents in Florida and 54 per cent in North Carolina, while Trump was the most popular among 57 per cent, though the sample from each of the three states was small. The big blue states of California, New York, New Jersey and Massachusetts unsurprisingly lean heavily Democratic.

Jobs, the economy and taxes topped the agenda on the most important issues in this election, which is not unusual given the focus on trade deals and the loss of US manufacturing jobs. It was followed by foreign policy, immigration, security and the environment.

Asked how important a candidate’s interest in Irish affairs in casting a vote, 60 per cent of respondents said that it would influence their vote either “a little” or “a lot”.

For this audience, with most watching what the candidates say about issues affecting Ireland, it is Clinton over Trump.