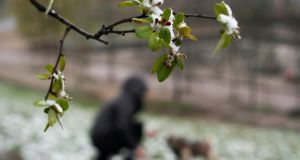 A woman plays with her dog in the Prenzlauer Berg district of Berlin on March 30th. Photograph: Alexander Becher/EPA

I had a friend in college. One of those brilliant, troubled types. A writer and a chemist. Sitting with him upstairs in Bewley’s one afternoon, he told me about roaming around at night, sleeping outdoors.

On the grass in St Stephen’s Green another time, he described how it felt when all the colours and sensations around you melded into one. He came from a family of high achievers. His older siblings with their diplomas in frames all over his sittingroom.

For his birthday once, he invited a small group of us to his house. We played Balderdash and Piffle in his bedroom. Then he brought out some tubes of paint, and asked us to fling colours at the wall. For years, I had this brown woollen cardigan with a small yellow paint stain that I couldn’t get off. His mother drove us home at three in the morning.

Naturally, he was considering the first. And I said, I know where you’re coming from.

We were young and stupid and dealing in hypotheticals.

It’s been two weeks now. Most of it spent right here at the diningroom table. My laptop and a cup of something. Often, with candles too. Little things. My husband working in the kitchen. He likes the bar table. He’s used to standing in his office. Suits me well.

“So, we haven’t A/B tested that yet,” he says through the wall. Our apartment in Berlin is now filled with the voices from his conference calls. Sometimes he comes out and his face is all different. He doesn’t know it. More self-possessed. A little further away than normal. A sense of purpose. His world is in our kitchen now.

Another day, he’s on the sofa, his head hunched over his phone in a professorial manner. I creep up behind him. The closer I get, the surer I am. I know those shapes and colours. I know that concentrated, contented expression. This is what middle-aged Germans do on the train after they have completed all the Sudokus in their flimsy puzzle books.

A friend recently asked if there was anything that still surprised me about my husband. Sure, I’d said. But I hadn’t been able to think of a concrete example.

“I only just downloaded it,” he says. “It’s actually pretty good!”

“There’s no need to be defensive,” I say. “It’s just that all of a sudden, I feel like I barely know you.”

I resolve to play Kebab World again, a phone game where you’re in charge of a fast food joint.

Make time, for the things that matter.

When we venture outside together, I am insufferable.

“I wasn’t scratching my nose.”

“You absolutely were. You do it all the time.”

If you were an animal, what would you be? What two people would you most hate to be stuck in quarantine with?

“I think it’s because we can laugh at ourselves,” he says in bed one night. “I think we defuse arguments that way.”

“So you think that’s why it works? Because even though we are very different we can both laugh at ourselves?”

“Yes, Katzi.” He is tired. He does a good impression of my incessant questioning. Do you think I’m a good person? If you were an animal, what would you be? What two people would you most hate to be stuck in quarantine with? I am maddening to live with. But so is he.

Taking out the bins and hanging up the laundry have become thrilling activities. Sometimes we fight over who gets to do it. Occasionally, we do it together. Slowly, we are becoming better people.

I’ve been writing more. The other day, I was having trouble focusing. Felt all tingly and restless. I brushed my teeth. It changed everything.

“It’s easy to forget,” he says. One of the reasons I married him is because he is kind.

I haven’t had a haircut in much too long. I no longer wear makeup. I slouch in front of the computer in the same green cardigan every day. I am startling to look at.

I go to Edeka to buy ricotta. I stock up on the essentials: triple chocolate chip cookies and a jar of kale

In the outside world, people are dying. Across the road, in the pharmacy, people line up in a neat, sad, socially distant line.

I listen to music really, really loud now. Sigur Rós when I’m writing. My husband says I hum along, really loud. He hears me through the door. “You must know you’re doing it,” he says.

The da-da-DING of WhatsApp notifications punctuate our days. We are not alone.

We chat on Zoom with five friends in Dublin. All of us in our sittingrooms or bedrooms. In this strange thing together. They tell us the street traders at home are selling masks now. My friend’s 3½-year-old teaches us some Mandarin he picked up at preschool.

Watching the news is always bleak. Never more so than now. But I indulge in small pleasures. Examining the travel books on the financial correspondent’s bookshelves. A medical expert’s spice rack. A political analyst’s balcony.

The clocks go forward. “Look,” says my husband. He points out the window. We are on the sofa, watching Tiger King on Netflix. It is seven o’clock. Still bright.

I go to Edeka to buy ricotta. It is remarkably cold. I stock up on the essentials: triple chocolate chip cookies and a jar of kale.

Inspired by a friend’s kindness, I scan through a box of Lindt chocolates separately. “For you,” I tell the cashier. “As a thanks.”

Her face changes. I struggle to key in my pin number with my disposable gloves. I step outside.

It is snowing. The day after summer time began.

A winter wonderland. Thick, fluffy flakes, like you see in picture books.

I watch them swirl over the empty playground. Choosing which daffodil to land on.

I return home, disinfect my phone, put the ricotta in the fridge.

My husband is in the kitchen. Looking out the window at the snow.