Returning to Ireland? Don’t expect things to be as they were

While emigrating is difficult, moving back home can be surprisingly harder. Feeling like a stranger in a place you once felt totally at home can be very unsettling and shocking 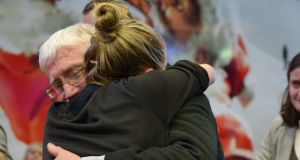 Alan Hilliard: ‘The one who returns has changed many levels. The experience of living in a new place radically alters their view on things. What they believe, how they perceive, think, feel, and act can be very different.’ Photograph: Brenda Fitzsimons / The Irish Times

This is the year of returnees; at least that is what many are saying. The Government is now encouraging emigrants to come home, as there are more jobs on offer and there is a definite skills shortage in some sectors.

Since 2009 we’ve had large-scale emigration out of Ireland. The first phase these emigrants experience is the excitement of going. It is strange feeling because there is an underlying and unarticulated sense of loss. But a person never knows how that loss will affect them until they go. This occurs in the midst of feelings of excitement and opportunity.

The interim years since 2009 have been what I call the ping-pong years, as people pop back and forth between various spots called “home” for holidays, celebrations, funerals, and on occasion, even just to surprise.

For some, the ping-pong is over now and they are settling in their new land. Maybe they have met someone they want to spend their life with, or are just enjoying themselves too much abroad to consider permanent return. Many may wish to be in Ireland but returning still seems too hard. There are no perceived opportunities in their field of work or study, so they linger away.

Others hear the more optimistic tones emanating from Ireland. The time away has taught them what is important, what they love and cherish. The decision is made and they are coming home.

Research tells us that while departure is difficult, returning can be infinitely harder. The process is made even more complicated by the assumption that it’s just a matter of slipping back in the flow of things.

But the one who returns has changed many levels. The experience of living in a new place radically alters their view on things. What they believe, how they perceive, think, feel, and act can be very different. When Jesus went to his home place, he met with strange reactions. People were not ready to acknowledge him for who he was and they rejected him (Mk 6:1-6).

It can be difficult for the family unit they are returning to too, which may also have changed in the meantime. Other siblings may be looking on from the sidelines seeing a great fuss being made of the returnee, and will have their own thoughts, views and feelings on what is happening as well.

Return, like a lot of change, has to be negotiated carefully. There is delight but there is also a degree of anxiety. This is all part of the emotional process of emigration and return that can be collectively called "migratory mourning".

When I wrote about this for Generation Emigration in November I was surprised by the response. The comments alone showed the multi-faceted dimensions of “migratory mourning”. While the focus was on the emigrant, a lot of the comments were from people like parents and siblings who were left behind, or resonances from those who had already returned. They were strong heartfelt comments.

Mourning or grief is as much about change and adaption as it is about loss. It can be as much about place and atmosphere as people. With all these issues in the mix, it is quite clear that returning is never just a matter of fitting in to the old ways; this approach is sure to cause conflict and damage relationships.

A person may not realise how much they have changed until they come back. When they return they see, hear, sense and feel things differently. It is only then they begin to see how they have changed; this experience can be quite startling in itself.

Feeling they are strangers in a place they once felt totally at home can be very unsettling and shocking. There is no real advice or instruction pack for this transition. In fact a lot of “packs”’ that deal with migration have reduced themselves to the lowest common denominator which is information; they keep the emotion out of it because they don’t understand it, perceive it, or they just prefer to ignore it.

The only advice one can give is don’t expect things to be the same as they were before you left. It’ll only cause heartbreak and disappointment.

Fr Alan Hilliard is coordinator of the Chaplaincy Service in Dublin Institute of Technology, and a board member of the Irish Episcopal Council for Emigrants. A version of this article appears in their recently published Emigrant Information Pack 2015.

What has been your experience of returning to live in Ireland? Let us know in the comments section below.