Why I love living in... Luxembourg 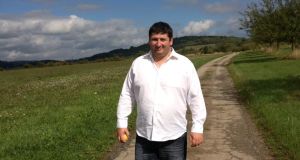 Dermot Doyle: ‘After my mother died last year my strongest link with Ireland passed away, and I haven’t been back since.’

When a friend suggested I join him to work in the banking sector in Luxembourg, I had just finished a contract job in Dublin and a relationship in quick succession. There wasn’t much to lose, so after one Ryanair flight I found myself in strolling through Luxembourg’s Christmas markets, which brings me to the first and one of the only things I still do miss about Ireland, which is the food. One Christmas I bought a chicken, thinking that the farce stuffing might be similar. I didn’t like it, but there was a moment of amusement when I explained to a French friend how we use the word farce in English. These days I just roast a bird myself. I miss fried breakfasts though!

The fortress city of Luxembourg is very picturesque, and the old and new towns are split by the winding Petrusse valley. Professionally, it may seem sedate by contrast to other financial centres, and many of the expatriates who come here seem to pine for more exciting careers or are waiting for the right job back home. But I’m happy where I am, partially because I enjoy the Grand Region (Luxembourg and the surrounding parts of Belgium, Germany and France) so much and partially because I couldn’t do the same professional work in Ireland. I now consult mainly to the EU institutions in the policy area and must be based close by. I work with many different nationalities, which I find tremendously satisfying.

Socially and culturally I find that the festivals held in region - especially the Duke’s birthday in the summer - are fantastic. With live music, fireworks and stalls selling drinks, crepes, grilled wurst and burgers, you can mingle casually all night. The region also has rolling landscapes, beautiful wine valleys and towns and is great for running and cycling. The nearby German city of Trier, with its well-preserved Roman buildings, is wholly different to Luxembourg. You can feel the texture and layers of Europe’s past right here, all the way from the Roman outposts and medieval castles through to the concrete fortifications of the last war right up to the sparkling buildings housing today’s EU institutions.

It’s been the unexpected meetings with history that have been the most intriguing. I once cycled from Luxembourg to Vianden as part of triathlon training. I rounded a bend and the majestic Vianden castle, perched on a rocky outcrop, loomed suddenly in full glory. I had to dismount and take the view in. Another time I was conversing with a neighbour in the small German border village I now live in and he described how, as a child, he had run alongside General Patton’s invading tanks in 1945, thrilled at the sight of them. My own house sits close to the old German Westwall and I have stumbled across many old war bunkers in the surrounding forests, some wrecked and some quite intact. One is hidden deep in the hill I live on, accessed via a locked metal gate which I found by accident.

I don’t miss Ireland. I have Irish artwork on the walls of my house, and I did enjoy visiting Dublin with my German wife, who likes shopping there. But after my mother died last year my strongest link with Ireland passed away, and I haven’t been back since. I never put roots down in my native land and I couldn’t see myself returning there for personal or professional reasons. Between the area I live in and the work I do, I feel strong links between past, present and future. I’m quite happy where I am.

Escape to the chateau: The Irish buyers with grand designs on French living