Number of emigrants returning to live in Ireland jumps 74%

Emigration still high with 31,800 Irish leaving in 12 months to April 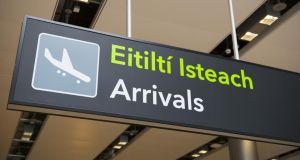 The number of Irish emigrants returning to live in the Republic of Ireland from abroad jumped 74 per cent this year.

New figures from the Central Statistics Office show 21,100 Irish nationals moved back to live here in the 12 months to April 2016, up from 12,100 the previous year.

Irish people are continuing to leave in high numbers however, with 31,800 leaving the country in the 12 months to April. This marked a 9.9 per cent decrease on the 2015 figure, and a 37.5 per cent drop since the numbers of Irish emigrating following the recession peaked at 50,900 in 2013.

Overall, there has been a 14.4 per cent increase in immigration in the last year, with 79,300 people of all nationalities moving to Ireland from other countries in the 12 months to April, up from 69,300 the previous year.

The majority of those emigrating were either at work or a student before departure, with just one in ten unemployed, down from one in seven the previous year.

The UK is still the most popular destination for emigrants, with 16,600 people of all nationalities moving there in the 12-month period.

Marie-Claire McAleer, head of research and policy at the National Youth Council of Ireland, said the increase in the numbers of returning emigrants was welcome, there are still “many impediments” which deter people.

“Substantial work remains to be done to stem the tide of young people having to leave Ireland at present and to provide the opportunities for them to return in the future,” she said.

“It is important to emphasise that provision of quality jobs with career progression opportunities and decent wages, affordable accommodation and access to quality services are key factors in young emigrants’ decision to return to Ireland and to remain living here.”

The Migrant Rights Centre of Ireland said Tuesday’s figures show that Ireland has an increasing demand for workers from overseas, but warned of an urgent need for immigration policy reform.

“Thousands of people are living undocumented in this country because our work permit system and labour migration policies failed to respond to demand for workers during the boom years. There are no structures in place to stop that happening again,” said MRCI policy and research officer Pablo Rojas Coppari.

“This trend of net inward migration is going to continue as the economy grows, and Ireland needs to act quickly to avoid repeating the mistakes of the past. Failure to reform our immigration and labour migration systems will waste resources and continue to leave people in limbo, without clear rights set out in law.”

Are you one of the 21,00 Irish people who returned to live in Ireland last year? Or are you one of the 31,800 who left? If you are living abroad, are you contemplating returning? Or if you are still in Ireland, are you planning to leave? The Irish Times would like to hear from you. Leave a comment below, on the Generation Emigration Facebook page, or email emigration@irishtimes.com with your story and opinions.