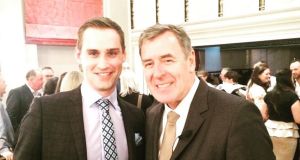 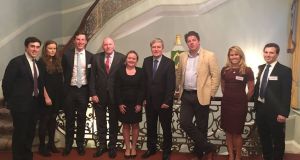 Members of the London Irish Graduate Network with Ambassador Dan Mulhall and Irish Times London Editor Denis Staunton at a Brexit discussion at the Irish Embassy.

I made the move to London just over a year ago to join Enterprise Ireland’s International Graduate programme. Enterprise Ireland (EI) have a formalised structure in place to ease the transition for incoming graduates. From accommodation and National Insurance numbers to setting up a bank account and phone, everything was taken care of and I had great support.

In my first week on the job, EI handed me a list with names of almost two dozen professional networks in London with Irish ties. I threw myself into these networks and have since spent time in the company of Packie Bonner, heard Willie Walsh speak about the future of the airline industry, and been exposed to some exciting Irish start-ups working to make a splash in London.

Naively, I thought this was fairly standard practice and that a lot of graduates have a similar “welcome package”, so to speak.

It was only when I started attending the London Irish Graduate Network (LIGN) events that I realised that the transition from Ireland can be quite a difficult experience, and just how lucky I was having such a supportive employer. From finding a bank that would accept the documents new graduates could produce, to trying to get a phone contract without any long-term proof of a UK address, the transition for many is plagued with difficulties.

Similarly, had I not been exposed to the aforementioned networks through EI, it would not have been high on my list to seek them out.

Understanding now the huge value of networking and gradually gaining a better insight into the struggle most Irish graduates face moving to London, when the opportunity arose to join the executive board of LIGN, I was delighted to get involved.

LIGN was formed in 2010 to provide members with a readymade professional and social network in London to help successfully develop their careers. Conscious of this mission statement, the network tries to find the right balance between social activities and professional events focused on career progression.

This year to date, we have taken over the Bounce Ping Pong Bar in Shoreditch for an evening of table tennis and drinks and celebrated St Patrick’s Day with a breakfast at the Cereal Killer Café, where we were warmly welcomed by Alan Keery, one of the Belfast-born co-founders.

Our most recent event, and most successful event of the year so far, was an event surrounding the topic of Brexit at the Irish Embassy, which tried to cut through the heat and noise to give our members an honest account of what leaving the EU would mean for them, for the UK and for Ireland. Hosted by Ambassador Daniel Mulhall, the event was the first time many of our members stepped foot in the embassy, and to meet the excellent team representing the interests of Irish citizens and Ireland in the UK.

As the generation that will face the ramifications of the Brexit vote long after the dust settles, it was encouraging for many of us to feel we were at least part of the conversation in the run up to the EU referendum, irrespective of the outcome.

One of the more interesting comments that night came from the Ambassador himself, where he noted how refreshing it was to be met with so many new Irish faces, as the majority of Embassy events are attended by a similar base of people.

There are many professional networks that Irish diaspora can tap into in London, with the likes of the Irish International Business Network (IIBN) and the London Irish Business Society (LIBS) doing a great job at bringing the cream of Irish business men and women together to signpost opportunities, and to help Irish people to share ideas and network with a wide demographic.

At LIGN we hope the network can provide a stepping stone for graduates as they make their foray into networking in a professional setting, in search of some mentorship and potentially their next career move.

This is why we encourage all Irish graduates who are either making the move or are already here, to get involved and use LIGN as a forum to strengthen both their professional and social network as they embark on their career here in London.

As the new intake of graduate programmes in London are settling into their roles, we welcome anyone who would like to join the network to get in touch. Our next event takes place on October 20th at Bedales of Leadenhall. For tickets see eventbrite.com.

For details on LIGN membership, see londonirishgraduatenetwork.com. We would also like to invite all current and potential LIGN members to join our LinkedIn group where we share upcoming events and projects, news, knowledge, and anything else helpful or interesting.