When the big freeze hit this laissez-faire part of the US, it was like the pandemic squared 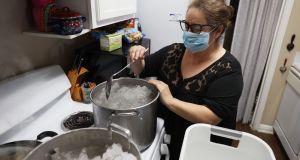 Ice storm: some Texans were left with only snow to cook and clean with. ‘It’s like: every man for himself,’ my brother-in-law said. Photograph: Joe Raedle/Getty

The first flurries came on Valentine’s Day, a steady, wispy snowfall, like a socially distanced blizzard.

A brutal wave of Covid-19 had just crested in the college town of Denton, about 60km north of Dallas, in Texas. It’s a good thing my daughters, Grace, who is 12, and Lydia, who is nine, study remotely, because we were inundated with “Covid on campus” emails all winter, single-case notifications eventually snowballing into aggregated reports of “a few individuals”.

The fatalistic Texan approach to the pandemic was summed up by a porter I interviewed outside a Fort Worth hospital in January: it was tough at first, he said, transporting the dead sealed in body bags, but he was well used to it now.

For three days, as the power came and went, it was as if we were stuck in a TV with dodgy reception, as our lives flickered between Little House on the Prairie and a Dallas reboot

And then the big freeze came: a pandemic inside of a pandemic, lockdown squared. For three days, beginning on Monday, February 15th, it was as if we were stuck in a television with dodgy reception, as our lives flickered between Little House on the Prairie and a Dallas reboot every hour or so. Whenever the wifi router gave a death beep, it meant the power was out – so also meaning no heat, no cooker, no internet, no mobile-phone service. Off I trudged like Michael Landon, scavenging the suburbs for firewood.

An hour later the microwave pinged, and back came all the modern conveniences, even the Curran family WhatsApp group. I posted a photo of a neighbour moseying to his pick-up truck in a pair of shorts and cowboy boots, off to carve doughnuts into a nearby car park, like Bobby Ewing at the Galway rally – on ice. He even carved a tyre-tread love heart in the ice at the end of our cul-de-sac.

I have lived in this US state, on and off, for 20 years, basically ever since I fell for a Texan named Sara Fanning during a postgrad course in Galway. When I moved to Austin to marry her, it was more of a “huh?” than a hip destination. I used to meet up with the only other Irishman in town for pints, and one of the things we’d laugh about were the “ice storm” emergencies. On what’s known in Ireland as a “fresh” day, Austin acted as though the aliens had invaded, complete with abandoned vehicles and a mayoral TV address.

This time the danger was real, as the coldest front on record approached. The temperature was about -5 Celsius on Valentine’s Day and dropped to about -20 the next day.

We woke up that Monday to find our townhome complex rendered with a smooth coat of snow that drifted to 20cm thick in places. The girls rushed out, and I followed their footprints a few minutes later. A vampire stake of an icicle hung off the garage. The snow was too powdery to make snowmen, but the extreme cold gave it a thick crust of ice, good for a snow Dalek.

The girls and I tested the ice on the metre-wide “creek”, as we call the drainage ditch behind the house. It creaked, all right, when it felt my weight. Gracie ran full speed after me. Her back leg punched through, but her forward motion kept her dry.

The extent of the catastrophe only became clear when our friend Diego Cubero texted. Did we have water or electricity? He lives near Corinth, just to the south of Denton, which lost both. To avoid utter meltdown, the electricity-grid operator was blacking out entire towns, even cutting off vital facilities like Corinth’s water-processing plant. Denton was lucky to have rolling outages.

“And our pipes just froze,” Diego texted, not long after his water came back. “At least I still have Scotch,” he said.

One plumber I talked to at the end of the week was on his 30th burst-pipe call of the day.

For three days I did little but feed the fire. By the last day the whole family were adept suburban lumberjacks. We cooked salmon wrapped in foil on the fireplace bricks

For three days I did little but feed the fire. Sara improvised a roof-rack bag in lieu of a sled, so I could drag dead wood from a nearby copse, along a laneway through the housing estates. A generous neighbour, Pablo, spotted me on the first day, making slow progress with a dead limb, and gave me a stack of firewood. By the last day the whole family were adept suburban lumberjacks. We cooked salmon wrapped in foil on the fireplace bricks.

Some of my family in Celbridge, Co Kildare, are fed up with the nanny state. After the “snowvid” winter in a laissez-faire state that privatised its electricity grid and gutted its healthcare budget, all I can say is: “I want my nanny!”

“Austin Water won’t even tell us when the water’s coming back,” said my exasperated brother-in-law Doug Fanning, who had a bathtub full of snow to cook and clean with. “It’s like: every man for himself.”

The Sunday after Valentine’s Day it was more than 20 degrees. We found frozen fish floating under slushy layers of ice on a local pond.The grandchildren will have their ears bent off them.

Now, warm sunshine and rising vaccination rates are drawing people out of their winter chrysalises in Denton.

“I’m just enjoying the spring, and life’s luxuries – you know, like running water, heat, things like that,” said Laci Kettavong, one of the managers of the coworking space that I returned to on March 1st, after a year away.

Rob Curran left Ireland in 2000; he is a journalist, working part-time with Dow Jones Newswires and freelancing for the Dallas Morning News and other publications