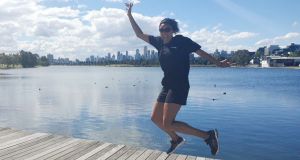 Sheila Magoye is originally from Blanchardstown, in Dublin, but now lives in Melbourne, where she works for Cricket Australia

Like many Irish people you meet on this side of the world, I have a story that brought me to Australia. As I finished my master’s in finance at Maynooth back in 2009, the global financial crisis hit and I faced the prospect of not being able to get a job in the field I had studied for four years. On April 7th, 2011, I boarded the plane to Melbourne so I could join my sister Catherine in the promised land down under. Knowing that I had a ready-made support network made it easier to embark on the journey.

I landed my current finance role at Cricket Australia after a few working holiday jobs and a stint as an accounts payable officer with a catering and events firm. This year I have been at Cricket Australia for five years. I am fortunate to work with some amazing people who facilitate all levels of cricket, from grassroots all the way through to national level. In spite of my questionable knowledge of the sport itself, the people at Cricket Australia are family and supported me through the toughest time of my life.

The worst of times

It was October 2015, just a few days after Dad’s birthday, when I got the call every expat dreads. Dad was going into a hospice; the prostate cancer had spread, there was nothing more they could do and I needed to get home – now! I was less than two months into my new job when I told my boss I needed to return home indefinitely to spend time with my dying father. He was incredible, told me to go, be with him and that my job would be waiting.

Arriving home, I visited dad in St Francis Hospice in Blanchardstown, and I cannot praise the staff there enough for the incredible job they do. Under their wonderful care, Dad was made as comfortable as possible and spent his last weeks surrounded by friends and family. Five years ago, on November 20th, 2015, he took his final breath.

From Uganda with love: my father’s story

Dad was an intelligent, passionate, generous, patient and caring man. Born into a large Ugandan family, he was the second eldest and a pseudo father to many of his younger siblings. His generosity was endless, and he put everyone else’s needs before his own; supporting family, friends and colleagues in whatever was happening in their lives.

He was proud of me and my siblings, Catherine (older) and David (younger) – yes, I am the middle child – and I believe he was prouder of us when we failed, picked ourselves up, dusted ourselves off and tried again. He had an unquenchable thirst for knowledge which took him from a village school on the Ssese Islands, an archipelago of 84 islands in the northwestern part of Lake Victoria, to a prestigious boarding school in the capital, Kampala. From school he went on to do an undergraduate degree in Wales, then a postgrad in Loughborough. He had a 30-plus year career here with the department of posts and telegraphs (the State department where Eir has its origins). He also managed to meet and marry my mum, Margaret Magoye, who is from Kinsale, Co Cork, and they had and reared the three of us.

Even after landing his job, he continued his own education and supported others on their journeys through his work with the Irish Council of International Students, the Ugandan Association of Ireland, the trade union Impact and many others. My favourite characteristic of Dad’s was his fierce independence. Moving away from home to a foreign land is daunting, but he took it in his stride and would instil that same independence in us.

I was lucky enough to take a father-daughter trip with Dad back to Uganda the year he died. That 3½-week trip around the country is one of the memories I most cherish. He passed away six months later, so it was almost the perfectly scripted goodbye.

Changing the face of men’s health

Before Dad died I knew very little about Movember and the global community of people making a difference in mental health, suicide prevention, prostate cancer and testicular cancer. Movember had a partnership with Cricket Australia that I was exposed to when I got back to work, and our former chief executive was a passionate advocate, so with my dad’s experience it was impossible not to get involved.

Over the past five years I have combined my love of walking with Movember’ s month-long global fundraising event to get moving for men’s health. Last year I walked the equivalent of Melbourne to Sydney. This year I decided to make up for a missed trip home and incorporate a little bit of Ireland into my challenge, so the idea to walk the equivalent of Malin Head to Mizen Head and back was born. I started on November 19th, and am 686km, or 134 hours, into the virtual trip. I have 414km, or 70 hours, of walking left to do.

Movember is an amazing organisation that is paving the way for men’s health, and I am hopeful that anyone reading this might donate what they can. If you can’t donate – because, let’s face it, this year has been tough on us all – then please, please reach out to the men in your life. Check in and make sure they are all right both mentally and physically. Nag them to go and get that physical they have been putting off because of lockdown; ask them if they are okay. Let the men in your life know that there are resources and people they can turn to.

I’ll never get used to experiencing a warm December like we have here in Australia, but when I finish my walk I will be taking full advantage of the sunshine to lay myself on a nearby beach and rest my weary legs.

You can donate on Sheila Magoye’s Movember page