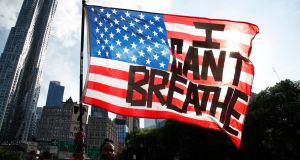 I can’t breathe: a protester in Manhattan. Photograph: Jason Szenes/EPA

The atmosphere in New York this week has been described as “chilling” and akin to a “war zone” by Irish people living in the city, as protests against the killing of George Floyd continue in the US epicentre of the coronavirus pandemic.

Protesters have taken to the streets for 10 consecutive days across the United States, demonstrating after the death of the 46-year-old unarmed black man, after a Minneapolis police officer, Derek Chauvin, kneeled on his neck for almost nine minutes following his arrest. Many of the marches have been peaceful, but some have turned violent, with rioting and looting reported in New York and other cities.

“New York looks and sounds like a war zone at the minute,” says Tom O’Sullivan, a 26-year-old from Kilgarvan, in Co Kerry, who moved to the city from London eight months ago to work in investment banking.

“All the premises near where I live in the East Village have been boarded up, shops closed early if not completely. Any of the recovering businesses that had just reopened to offer takeaway food and drinks after two months of Covid-lockdown have just been shuttered.”

Premises in Soho and the Bowery area of Manhattan were ransacked last Sunday night. O’Sullivan describes seeing glass from broken windows all over the streets. “Any business that was left thereafter ensured they were boarded up.”

He believes the looting has been targeted, with “gangs on bikes” targeting higher-end stores like Nike, Adidas, Moncler, Apple, Best Buy and Microsoft in the midtown area, away from the peaceful protests.

Paul O’Dwyer, a 56-year-old immigration lawyer from Co Kilkenny, lives in lower Manhattan, which is under curfew from 8pm to 5am. He describes similar scenes.

“Almost all buildings with glass-windowed storefronts are boarded up with plywood. The only sound at night is police sirens and helicopters. In the early evening you see police vehicles moving around in convoys, and everyone immediately becomes tense. It is quite chilling,” he says.

O’Dwyer attended a peaceful rally on Monday night. “The marchers were young and angry and all races. We stopped outside the local police precinct, which was surrounded by barricades, with police in riot gear visible just inside the entrance. No police came out to show support or take a knee, which would have been a huge gesture.”

He believes the protests would be much bigger were it not for coronavirus. “Many New Yorkers have left the city for second homes since March, and many others support the protests but are afraid of getting sick.”

The governor of New York State, Andrew Cuomo, expressed concern this week that the demonstrations could accelerate the spread of the virus, and urged protesters to get tested.

Alison Gibney, who lives in Queens, attended a vigil in nearby Astoria Park, “in a large open space with social distancing and masks. It was incredibly peaceful”. She says that, as a former on-camp member of the Occupy Wall Street movement, she doesn’t object to social disobedience, but decided not to attend the larger demonstrations in the city because she has a young son with additional needs.

“Despite living on the same street as the largest public housing in the US” – Ravenswood and Queensbridge Houses – “with majority African-American populations, people were calm. Our community had been hard hit by coronavirus deaths. People could not attend the funerals. There was little appetite for more pain, and a depressing sense of acceptance that these police killings would continue regardless.”

Peaceful protests take place daily in Queens, she says, and their congresswoman, Alexandria Ocasio-Cortez, hands out masks at them. “People obey the curfew here. Manhattan is a different story.”

Paul Finnegan, chief executive of New York Irish Center, in Queens, agrees. “The city is huge, and there are only certain pockets that have trouble, in Manhattan and Brooklyn, ” he says. Queens, which has a large Irish population, has not seen much rioting so far. “Personally, I don’t feel unsafe.”

Finnegan, who came from Co Galway to live in New York in 1986, married Rosa, a Dominican, in 1997. They have two children, aged 20 and 15. “The Irish in New York have become a much more tolerant group in recent decades,” he says. “I have always found, living in New York, that people have accepted my wife in my world and me in her world. I would say there is a growing population of mixed-race children in this town that are half-Irish.”

New York Irish Center is just one of a number of organisations that have come together under the Sláinte 2020 initiative to help Irish people in the city affected by the Covid-19 pandemic, financially or otherwise, supported by the Department of Foreign Affairs.

During a virtual conference with 80 leaders from the Irish community in New York last month, Tánaiste and Minister for Foreign Affairs Simon Coveney acknowledged that “New York has been through hell” as the world epicentre of the virus. More than 30,000 people have now died in the city after contracting Covid-19.

“We’re with you, we’re suffering together and I know this is a very tough time for you to be away from home,” he said.

Finnegan says there has been a slowdown in requests for help from the Irish community in the past week or two, as businesses start to reopen after lockdown, and construction ramps up again. But he believes a number of undocumented Irish people may have been forced to return to Ireland in recent weeks, having lost their jobs and with no financial or social-welfare supports.

“We have dealt with a few cases where people have gone home, and are not sure if it is a broader phenomenon just yet,” he says.