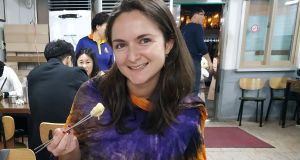 Ciara Hogan is one of the Irish citizens who flew back from Peru on Monday.

Ciara Hogan, who is 27 and from Tipperary, is one of the Irish citizens stranded in Peru who arrived home from Lima on Monday on a rescue flight that the Government arranged to get them back during the coronavirus outbreak.

“They were asking for €3,000 per person to get on the flight in the beginning,” she says. “I went out to Peru on March 6th for a yoga teaching course, while I was waiting for a work contract to come through,” she says. “The course was for a fortnight, and I was due back on March 26th.”

The venue for the yoga course was in a jungle 90 minutes by plane from Lima, at Moyobamba. “There were 20 of us on the course. I was the only Irish person on it. Two were from the UK, and there were other Europeans, from Norway and Finland. Three or four were from Canada and the rest from the US. When I went out, coronavirus hadn’t hit Peru.”

On March 14th Hogan registered with the Irish Embassy in Chile. A two-week quarantine was to come into effect two days later.

“It was a total rollercoaster, and people reacted in very different ways. We were a week into the course by then, and all our group were healthy. We thought that once we stay in this hotel, we can all do the quarantine together, which was to start on March 16th. The hotel owner said we could stay until the 31st, which was when quarantine was to finish.”

Some people chose to leave the course early. “They were booking flights from Lima through Brazil, and Florida, and Mexico, and spending thousands of euro. I didn’t know any other Irish people in Peru, but the Embassy in Chile were very supportive. I wanted to finish the course, and I thought I could ride it out. But the situation was changing so fast.”

By then the country was in lockdown. The Embassy emailed Hogan to see if she was interested in paying the €3,000 to join a flight back to Europe from Lima. “I said no. And that I was a long way away from Lima, and didn’t know how I’d get there anyway.”

The next correspondence Hogan received was an offer of a flight home for €400, with a bus picking her up and bringing her to Lima. This time she said yes, realising that if she said no she could be stranded indefinitely. “We couldn’t move from the town we were in. And €400 was definitely more affordable than €3,000. The Embassy staff were incredibly supportive and helpful.”

By this stage she was communicating via WhatsApp with the Embassy.

At midnight last Friday, a bus picked Hogan up from her hotel. “I was the ninth and final tourist to get on the bus,” she says.

The other eight tourists being brought to Lima were an Irish couple, a Bulgarian woman, a Finnish woman and four British citizens.

“The bus took 32 hours, when it should only have taken about 26. We got held up a few times on the way. There was a lockdown between 5pm and 8am, so we had a lot of issues being on a bus between those times. The army and police were stopping the bus as we went into different districts.”

Their documents and paperwork were constantly scrutinised. Soldiers called police to look at the paperwork. Everyone on the bus had documentation showing they were due on flights from Lima on Sunday, March 29th. The true reason for the delays gradually became evident.

“A police officer explained to us that we were now in a district that was virus-free, and they didn’t want the bus travelling through it.”

They eventually got to Lima at 7am on Sunday. Their British Airways flight, which left from a military airport near the city, was due to depart for London Heathrow that afternoon. “We heard that it had come into Lima with only four people on it – two people from the British foreign office and two army people.”

Their flight, with a mix of British and European citizens, would leave at 4pm, with an onward Aer Lingus flight from Heathrow. Those going to Dublin paid €400. British people flying as far as London paid £250, or about €285. Other European citizens paid €900 to get to the UK, and would then have to arrange their own onward flights.

“There were 219 seats on the plane, and every seat was taken. The pilot was lovely. He said how the whole mission was to bring us home, and that he hoped we wouldn’t mind that the in-flight service wasn’t the same as usual, and that there would be no alcohol served either. I had thought there might be a bit of craic on the plane, but it was very quiet; people were just very grateful to be on the flight.”

Hogan and the other Irish citizens the boarded the Aer Lingus flight from London and arrived at Dublin Airport at 2.30pm on Monday. She’s now in self-quarantine with family in Co Clare.

In all this, Hogan managed to finish her yoga-teaching course. “Was the yoga course worth it? I’ve definitely learned a few skills to get me through this time. I have learned to be patient, and to live in the moment, because you can’t control the future.”