Wild Geese: Tenor Paul McNamara lives in Berlin and has performed all over Europe 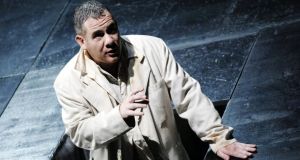 Limerick-born tenor Paul McNamara’s lifelong love of singing has turned the world into his stage on which he has performed Mozart, Verdi, Rossini and Wagner, while collaborating with musical companies across the globe in venues including the Berliner Philharmonie, Carnegie Hall, La Fenice in Venice and the National Concert Hall in Dublin.

Beyond many more opera and concert performances, he has been involved in all facets of opera, from mentoring, teaching, casting and leading an opera group.

“I always loved opera and singing. I sang in the church choir at the Franciscan Church in Limerick and have fond early memories of going to see productions of the Cecilian Musical Society in the Crescent Hall in Limerick when I was six.”

After leaving school in 1984, McNamara did a Bachelors Degree in Music at University College Cork.

“I studied cello and piano, but singing was my passion. When I finished UCC, I got a singing job in St Patrick’s Cathedral in Dublin. I moved there in 1988.”

His operatic debut came in 1989 with the then-newly founded national theatre company, Opera Theatre Company (OTC) in a production of Haydn’s Country Matters.

“As it happened the tour opened in the Belltable in Limerick so I actually got to make my professional operatic debut in my hometown. On the tour, we also performed in both the Gate Theatre and the Abbey Theatre in Dublin.”

In 1991, McNamara moved to the UK to study opera at the Royal College of Music in London. “I was living there until 1999, performing as a freelancer, but I took a sabbatical from singing altogether for two years and managed London’s oldest bespoke shoe-makers Henry Maxwell & Co of Mayfair.”

McNamara travelled back and forth to Ireland during his time in the UK when he returned to his career. “I’d come over to Ireland for a few months, then go elsewhere, sometimes for a few weeks or days. It varied and it was exciting.”

To date, his broad repertoire includes playing Christian in Alfano’s Cyrano de Bergerac and and Chairman Mao in Adams’s Nixon in China, while baritone performances include Florestan in Beethoven’s Fidelio, Herzog in Strauß’s Eine Nacht in Venedig, Guglielmo in Mozart’s Così fan Tutte and Figaro in Rossini’s Barber of Seville.

A love of Wagner and Schuster brought McNamara to the German capital many times and, in 1999, he decided to settle there. “Germany is the home of opera. Even smaller towns have opera societies, while some of the world’s great opera houses are there. Berlin is an exciting melting pot, which was just starting to blossom after unification almost 10 years previously,” he says.

“In the centre of Europe, living in Berlin puts me in a unique position to be able to travel not just around Germany, but neighbouring countries too in a matter of hours. It’s a real privilege,” he says of the German capital.

“Opera is part of the fabric of every town here and I spend a lot of time touring the country singing in German. But being Irish opens a lot of doors. Germans love the Irish way, and they have been very welcoming.”

Though he works in Berlin and Germany, McNamara has maintained contacts to Ireland.

He also completed a masters in Music at UCC in 2014.

In December 2018, he was appointed to the position of artistic leader of the Dutch National Opera Academy, a collaborative masters programme in opera performance of the Conservatorium van Amsterdam and the Royal Conservatoire The Hague. His responsibilities include the development and implementation of artistic and educational policy and responsibility for the financial oversight of the programme.

“I’ve divided my time in the last two years between Berlin and Amsterdam, two of Europe’s great cultural centres. I have an apartment in Amsterdam and really enjoy being there for part of the year.”

Obviously all of this changed back in March last year for obvious reasons and McNamara has been in Berlin ever since. “Covid-19 provided was an unfathomable blow to the performance industry. But for me, although I spend most of my time on the road, I’m really a bit of a ‘home bird’ so have really enjoyed the unexpected time at home this year, especially spending time in my own kitchen.

“I’ve been with my husband for 25 years (he’s a radio journalist from Köln) – like so many couples this year it has been very different to have so much time together. That’s definitely been a plus.”

McNamara says he has been lucky enough to work online as a mentor, teacher and performer, but misses live audiences the most.

“People are still able to sing online and we can do a lot with that. I’m still working as a casting consultant and have lots going on. I’m very lucky that I haven’t lost my identity.

“I do feel for those who are solely reliant on the live industry, but I do have gigs lined up this year and look forward to them.”

Despite enjoying being home in Berlin, like many others, McNamara says he is looking forward to returning to Ireland.

“I haven’t been home in over a year, and I do miss it. It’s a long stretch not to see friends and family. When we can travel again, I’ll return to Ireland, which is my spiritual home. But in the meantime, I’ll wait to see what this year brings and stay positive about the future.”