Family in Ireland, Canada, Australia, Scotland and New Zealand will gather virtually to pay our respects 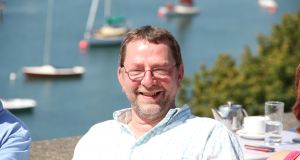 Michael Aitken was born and raised in Scotland. He moved to Ireland in 1980, and lived in Kinsale for the latter part of his life. He died aged 64.

When you move away from Ireland it is always home. As a Carrigaline native, I have spent exactly half of my 36 years moving away and coming home. Arriving back usually involved settling back in with my dad in Douglas, Co Cork. He and I would catch up over KC’s fish and chips, and pints in the Tinny Shed next door. With my grandmother close by in Blackrock, and friends all around, coming home is always a whirlwind.

Throughout my life, my dad remained a phone call away and a frequent international visitor, whether I was at university in Glasgow, working in Ontario in Canada, or most recently, while running my own business in New Zealand.

My father was born and raised in Glasgow in Scotland, he moved to Ireland in 1980. He and his brother worked in Ireland on Haulbowline Island for most of their careers, as did my brother. He was due to retire aged 64 in September.

It is hard being a modern grandpa, with grandchildren in Australia, Canada and New Zealand, but we shared so many occasions with him over Skype. Gifts always arrived from him in the mail, well thought out and expertly wrapped in packing tape, and filled with Cadbury Roses in place of polystyrene packing nuggets.

Video calling is a lifeline for expats everywhere. Last December, Dad’s Skype “didn’t seem to be working”, reducing video calls to phone calls. This was a frustrating over Christmas, but little did we know that this sojourn from video calls was strategic; my father was experiencing rapid weight loss, and undergoing test after test at Cork University Hospital. The results were devastating; he started 2020 with a cancer diagnosis.

Timing my visit to coincide with those results, I returned to Cork in January to see my dad, and have those heart wrenching conversations about treatment and timelines and futures suddenly so short. He assured me it was in hand, they could operate and there would likely be chemotherapy. I was hopeful.

Leaving Ireland there were vague whispers of a virus, in Asia, that may grow to the scale and size of SARS. I had business meetings in Dublin, a global event in Toronto and the New Zealand company launch all coming up in March, but I was not unduly concerned. Like so many people, if I could go back in time I would have changed my plans in an instant.

In a horrifically short period of time, the doctors found an infection and admitted my father to hospital. Days later it was in lockdown as the first case of Covid-19 appeared at CUH. We were told no visitors allowed. Could we go and wave from the carpark?

As the word pandemic began to circulate around the globe, my father remained in isolation with an infection, but was mercifully virus free. They were still going to operate and still going to do chemo, just watch and wait and do not come, as no visitors will be allowed. My brother in Bantry, my sister in Perth, Australia and I in Canada all watched the news with rising horror, as the world became a paradigm of outbreaks and epicentres.

We spoke almost every day, he from his bed in a hospital he described as a ghost town. He urged me not to come, adamant that we were not to waste our lives hoping to catch a glimpse of him in a sixth floor window. Go to the summit in Canada, he urged. We spoke three times a day. A day later we got on the plane to New Zealand, for a launch event still going ahead in a country very much behind the curve.

From the airport in Toronto, I spoke to him. “I can still get on a plane to Dublin,” I said. We argued and he won. I went to New Zealand. I am still here, in isolation with my two young boys. For Mike Aitken, my father, the end was rapid and painless and heartbreaking, and so very far away. He died aged 64 on Friday, April 3rd.

I am 18,000km away with my two boys Donnacha and Fiachra. We will be up at 1am for an online funeral with close family. Less than 10 people will be at the funeral home. We are setting up a Zoom call for those who can’t be there to listen to the brief service. The hearse will proceed along a route lined with the many friends who live within proximity of the main road to the crematorium. People will disperse to their homes for another Zoom gathering with close family in Ireland, Canada, Australia, Scotland and New Zealand - hundreds of people who cannot pay their respects in person. How do you celebrate the life of a great man, amazing father, wonderful loving grandpa and dear friend to so many people around the world, when we can’t gather in person? We are still trying to figure that one out.