Recent emigrants were used to flying regularly. That luxury has been snapped away 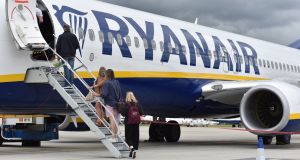 In recent decades, the advent of cheap flights and social media has allowed the maintenance of transnational family and friendship networks in a way that was not previously possible. Photograph: John Keeble/Getty Images

For various reasons, I spent much of 2017 commuting on a weekly basis between Cork and the English Midlands. This involved numerous early morning and late evening flights between Cork and Birmingham. Over time I came to recognise fellow travellers who were clearly in similar circumstances to myself; people who Dr David Ralph of the Sociology Department in TCD has referred to as “Euro-commuters”.

Huddled blearily in the pre-dawn departures area of Cork Airport, they awaited their Ryanair or Aer Lingus Regional flights to Stansted, Birmingham, Manchester or Edinburgh with a kind of weary resignation. There is very little glamour in air travel when you’re doing it twice weekly.

While not an easy life, even at the time this was obviously a privileged position. The ability to move across international borders with relative ease is not a freedom that is granted to everyone. From the perspective of the current moment, the idea that I, among numerous others, got onto a cramped airplane to fly to another country twice a week as part of our normal working routine seems almost unimaginable.

This personal experience, as well as my past research on transnational and diasporic identities among the Irish in England, has left me with mixed feelings regarding reports that Ireland may exclude Britain from the so-called “Green List” of countries from which international restrictions can be relaxed. From a public health point of view, there is a strong logic to this: it is difficult to argue that the virus has been brought sufficiently under control in Britain to make travel between the two countries a safe prospect. However, the distress this will continue to cause to those living transnational lives between Ireland and Britain should not be underestimated.

The Irish abroad are regularly referred to collectively as “the diaspora”: a blanket term that covers a vast range of identities, experiences and relationships with contemporary Ireland. Not all of the diaspora will be affected by being unable to travel to Ireland. But those with transnational identities undoubtedly will: those I have previously defined as living (at least to some extent) in Ireland and one or more other country simultaneously, whether that be physically, socially, economically or psychologically.

Transnationalism is not therefore solely associated with those who commute back and forth between Ireland and Britain: it could apply to those who have family caring responsibilities that transcend national boundaries, who maintain friendship groups in multiple countries, or those who returned home to vote in the recent referendums on equal marriage and abortion rights. It equally, of course, applies to migrants within Ireland who retain such links to their own countries of origin.

In this context, it has been striking that the national conversation around the resumption of travel in and out of Ireland has been largely framed in terms of holidays and tourism, rather than the re-unification of transnational families. (This article from The Irish Times is a rare exception, while at the same time appearing to assume “annual” family visits).

Were you planning to emigrate this year?

This is an odd omission: we are, after all, less than a decade out from the last major wave of emigration, and the number of people leaving the State every year remains far higher than it was during the Celtic Tiger years. According to the latest available CSO figures, more Irish nationals left the State in the year ending April 2019 than returned to it.

Despite this, emigration barely featured as an issue in the recent General Election, in contrast to the 2016 election when “Bringing Our Friends and Family Home” was a central plank of the Fine Gael manifesto. That, four years later, so many of “our friends and family” are still abroad and unable to return due to the pandemic should possibly be more of a factor in discussions around re-opening Ireland than it currently is.

This is not to say that consideration of the Irish abroad has been entirely absent over the course of the pandemic: welfare-focussed Irish community organisations worldwide have been providing support to their more vulnerable members, with assistance from the Department of Foreign Affairs’ Global Irish Unit. However, those migrants with more transnational orientations are unlikely to belong to such community organisations, which are largely the legacy of previous generations of migrants, where the ability to communicate with or travel to Ireland was a lot more limited.

In recent decades, the advent of cheap flights and social media has allowed the maintenance of transnational family and friendship networks in a way that was not previously possible. This has sometimes led to the so-called “Ryanair Generation” of migrants being perceived as uniquely fortunate compared to their predecessors. In my own research on constructions of “authenticity” among Irish people in England, older Irish migrants frequently contrasted what they saw as the affluence and mobility of younger migrants with their own post-war experiences: this was occasionally accompanied with a note of resentment at the seeming lack of interest such migrants had in getting involved with Irish community organisations.

Similarly, drawing a contrast between the 1950s generation of “traditional” emigrants and the post-2008 generation of “transnational” emigrants has served as a rhetorical device that allows Irish politicians to distance themselves from responsibility for the welfare of the latter, characterised by Mary Hickman from the Irish Studies Centre at London Metropolitan University as “mobile entrepreneurial adventurers”.

It is undoubtedly true that this characterisation has been taken on by many Irish people abroad as part of their own identity. Professional Irish migrants in Britain, and London in particular, tend to stress the opportunities afforded by living in a global city while being a mere hour’s flight from “home”. Again, the ability to fly home at short notice appears crucial to the identity and wellbeing of this cohort: Jeff Moore’s 2018 research at DCU on resilience among recent Irish migrants to London emphasises the importance of transnational support networks which are maintained by regular flights home.

In a post-Covid environment, the question then becomes: what happens to these support networks when this ability to fly home is suddenly taken away? There may not be a more geographically immediate support network to take its place.

While social media enables such networks to be maintained virtually, there is research evidence that this can be a double-edged sword at times. Breda Gray’s research at the University of Limerick in 2013 noted that for female migrants in particular, technological connectivity cannot replace “being there” at moments of family crisis, but only serves to heighten a sense of separation.

Further research has highlighted that this ability to be in constant communication with family members can be a source of strain in itself: providing transnational migrants with regular reminders of their own emotions and struggles.

This is accentuated when attempting to care for a dying family member remotely: an experience that many transnational migrants may have gone through over the course of the pandemic. What then, happens to a generation whose defining characteristic of mobility has been erased?

The outgoing chief medical officer Tony Holohan declared himself “beyond nervous” about any increase in international travel in the short to medium term before he stepped down from his position earlier this month. With the prospect of greatly reduced flight options into Ireland in the longer term (for environmental as well as financial reasons), it appears unlikely that the patterns of transnational mobility that we have seen in the last decade can continue.

We should acknowledge the social and psychological implications this will have for those whose work and family lives cross borders. There is more at stake here than the disappointment of cancelling a summer holiday - we can ill afford another forgotten generation of Irish emigrants.