Messages ping in at all times of the day and night from Ireland, London, Hong Kong, Sydney and New York 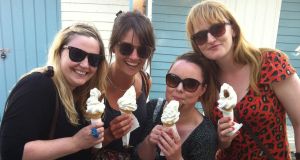 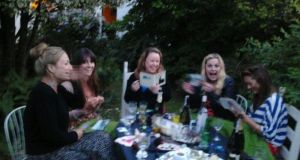 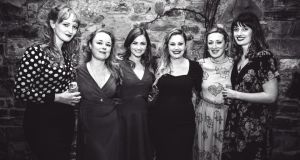 Friendship week: From best mates to bromances, all week on irishtimes.com/life-and-style, we take a closer look at friendship.

There’s a photo in my phone which will never see a frame, but it captures one of my most treasured memories. It was taken in the back garden of my friends’ parents’ house in Glenageary at dusk, on one of those weirdly warm summer evenings in Dublin when you can sit out long after dark without noticing the cold.

Five of us are clustered around a table, the sixth behind the camera; it is the first time my group of closest girlfriends from school are all together in as long as we can remember, as the first of us turned 30 in July 2013. The light is fading and our faces are blurred, but we are clearly cackling with laughter as someone reads aloud from one of the pieces of paper we are all clutching in our claws.

We have brought shoeboxes stuffed with our old photographs and notes and letters kept from school, to reminisce about our teenage angst over first kisses and awkward teenage discos and spots and braces and dodgy crushes, and whether we’d ever save enough babysitting money to buy those gorgeous nylon Susst tracksuit bottoms from the Motion Picture window in Dun Laoghaire Shopping Centre.

Those shoeboxes hold the archive of our shared history, and we get hours of fun every few years looking back over the long forgotten things that consumed our adolescent lives. Some of those notes date back to our very first days in secondary school in Blackrock, where we met 20 years ago this year.

The six of us remained close while in college in Dublin and Galway, but after graduating we began to scatter. The notes and letters turned into emails and the odd Skype call, but as they physical distance between us grew and the time differences stretched wider, so too would the length of time that would pass without us being in touch.

After months of not talking, the conversation when we did finally get around to arranging a Skype chat, or sitting down to write that long-overdue email, would be taken up with the “big issues”. Even things that seemed momentous when they were happening would pale into insignificance or be totally forgotten by the time we managed to chat properly. We were losing out on the little day-to-day things on which our friendships had always been based.

But three years ago, one of the girls sent us an invite to download WhatsApp. Some of us had never even heard of the messaging app, and out of all of them I was the most reluctant to join what I thought was would be yet another social media service that I’d feel obliged to check all the time. None of us realised what a wonderful addition it would be to all our lives.

A constant conversation now flows across it on a daily basis, with messages pinging in at all times of the day and night from Ireland, London, Hong Kong, Sydney and New York. We still talk about the big things, but also hear about all the minutiae – when we’re pulling our hair out when a boyfriend hasn’t done the washing up in days, or we’ve had to make awkward chat waiting for a bus with an old classmate from school whose name for the life of us we can’t remember.

In the last year, we have been through the serious illness of three parents, a father’s death, a marriage, an engagement, a redundancy, several job interviews and countless relationship problems, and the group has become a lifeline for all of us, especially the girls who are far from home and embarking on new lives in unfamiliar places. Whenever we’ve got news to share, or we’re feeling a bit down, or confused, or just want to tell someone about something funny we’ve seen, it is such a comfort to know our best friends are at the other end of the line, ready to give non-judgemental advice or a sympathetic word or even just a LOL, often within seconds, whatever the time of day or night.

Despite being divided across three continents, we all have an in-depth knowledge of each other’s lives, from the weather on a particular day or what we are watching on Netflix, to the big life decisions we are making about careers or relationships.

And we make each other laugh, hard.

Of course nothing can ever replace those increasingly rare occasions when we get to meet and hug and giggle and cry in person, and we still Skype sometimes and send the odd email, especially when one of us is in need of a bit of extra support. But WhatsApp has kept the group banter alive in a way none of us could ever have imagined. It makes the goodbyes so much easier, when we know that moments later we can be nattering, despite heading off to different continents.

In preparing for a chat on The Irish Times Women’s Podcast about WhatsApp, I asked the girls (on WhatsApp, naturally) for their views on what our group chat means to them. They all sent great responses which have inspired this article, but one of them summed it up so perfectly:

“I count myself so lucky to have a group of incredibly smart, hilarious, wise, dirty, kind women to make me laugh, buoy me up, hear me rant, give me amazing, specific advice, and let me know I’m not alone. Even though, logically, you know that everyone struggles, it means so much to know that we all have wobbles about relationships, jobs, health, parents getting older, baby panic, doing stupid shit, and generally being real life adults who want to be taken seriously, but also feel like frauds sometimes.”

Our WhatsApp group is a grown-up continuation of those notes that we used to fire across classrooms to one another; but now, we fling these messages virtually across the world. We’re separated by thousands of kilometres, but the messages from my best friends are still right there in my pocket.

Have a friendship story to share? We want to hear from our readers abroad for Friendship Week. Email your meaningful, amusing or uplifting friendship story, in less than 300 words, to emigration@irishtimes.com before this Wednesday, February 10th.