How we started speaking as Gaeilge in rural Alabama 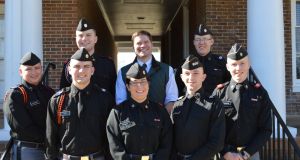 Rankin Sherling (centre) with the cadets in the Gaelic Club.

Perry County is the one of the least populated and poorest counties in Alabama. Living here is like living in a Faulkner novel. For years local Baptists disallowed the legal sale of alcohol, and thus, until a generation ago, on Saturday mornings thirsty men trudged into the deep woods and left money on a stump. They’d take a short walk and come back, and the money would be gone. In its place would sit a bright jar of moonshine whiskey. There are still families here who own vast estates and live in grand, antebellum mansions. There are stately houses in varying stages of ruin. There are hillbillies and rednecks, gangsters and preachers. And, there’s also Gaeilge, but that’s a long story. We’ll get to that.

If you’re American and have Irish roots, chances are your Irish heritage drowns out just about everything else. Like an aggressive plant, not much else can grow near it without being overtaken. It’s a law of nature here, a truism. My family tree has mostly Irish and Scottish Gaelic roots. I always knew I was Irish. Most of us do down here. Not in the sense that people born in Ireland are Irish, but Irish nonetheless.

I attended the University of Mississippi, better known as Ole Miss, a place famous for its scholars of Southern culture, and it was there that I wrote a Master’s thesis on the most logical thing to study at Ole Miss…Irish immigration. There wasn’t even an Irish historian on staff there, which should have hurt my chances of creating a career in the field, but it actually helped, in that it forced me to approach the subject from a fresh perspective. The thesis actually won me a scholarship to go and study the history of Irish migration with D.H. Akenson, the world’s foremost expert in the field, in the most logical place in the world…Canada.

Canada has two Gaeltachtai. One is Scottish Gaelic and formed organically when Scottish Gaels settled in Cape Breton. The other is Irish and was formed through the sheer will power of one man, Aralt Mac Ghiolla Chainnigh. This Irish North American Gaeltacht project just happens to be right outside Kingston, Ontario, Canada, where I went to study Irish migration. Aralt was my first Irish teacher, and he recommended that I go to Oideas Gael in Donegal.

With a small grant from my university, I went to live in Donegal for the summer, in a tent. The weather of coastal Donegal is legendary, and I was cold, wet, or at least soggy most of the time, but I loved it. I loved the people at Oideas Gael, and I loved learning Irish. The next year I spent six months in Belfast as a visiting researcher at the Institute of Irish Studies at Queen’s University, Belfast. I was primarily researching material that would become my dissertation and eventually my first book, The Invisible Irish, but I went to Oideas Gael as often as possible. I also went to weekly Irish classes at Cluain Ard, and to An Droichead and an Culturlann as well. In 2013, I won an Ireland Canada University Foundation Fellowship to study Irish for four weeks at NUI Galway’s Cararoe campus. Even with all of that, nil me liofa ar chor ar bith. Ach bim ag obair go cruath ar.

And now I teach history at a small military school, Marion Military Institute (MMI), in Perry County, Alabama. It’s a two year college that serves a smattering of different socio-economic groups, but most of our students are underprivileged or solidly working-class at best. So, the majority wouldn’t have had much contact with any foreign cultures.

Last year, my first year at the school, I started a free, weekly bunrang. We meet at a local bookstore run by another Irish American, Charlie Flaherty, who opens his little used bookstore especially for us on Thursday evenings. He also flies both the Irish and American flags when he’s open, which is not something often seen in rural Alabama.

Last spring, I applied for and won a grant from MMI to take two cadets to Oideas Gael. It was incredible (read more at mmibeyondthebarracks.blogspot.com). This year, the bunrang has grown to 6-10 students consistently. The kids absolutely love it, and they greet me as Gaeilge when they see me on campus. We all love it. It makes us happy to use our own secret language here.

We are now raising money to go back to Oideas Gael this summer, and this time we’re looking to bring as many students as we can. We’ve recently started a Facebook account to try to help us do just . If you love the Irish language, and you have a spare penny, leave it on the stump. There’s no telling what could happen.