The Climate and Me: Catherine Corcoran has been working in Addis Ababa for two years 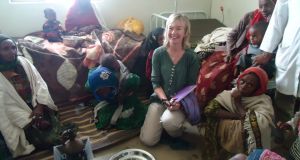 Catherine Corcoran with women and babies in a neo-natal unit in northern Ethiopia. 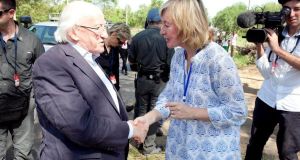 Ethiopia is currently experiencing one of the worst climate-induced crises in 30 years. An estimated 15 million people are affected, and will need food aid next year.

The current emerging food security crisis is the result of a combination of factors, including the pre-El Niño failure of the spring rains and the El Niño-induced late onset, erratic and early cessation of the main summer rains.

I have been working with Concern in Ethiopia for the past two years in an effort to respond to the crisis, to save lives and save livelihoods.

I spend a lot of my time these days rattling along on half-made rural roads, talking to affected rural communities who gather to tell of their fears.

I bring these stories back to allies like Irish Aid, which supports us to set up food distributions and health interventions with the poorest and most malnourished women and children.

The work is done in partnership with the Ethiopian government, which is making a Trojan effort to ensure drought will not turn into famine this time.

Concern also raises funds to provide water, distribute seeds for the next rains, and help farming families replenish livestock to replace farm animals that have died this year.

This type of climate event increasingly threatens the livelihoods of the poorest. Ongoing and worsening droughts and other climatic shocks are occurring with greater frequency, and these shocks erode development gains and attempts to tackle hunger.

If we are to address hunger in the longer term we must tackle the effects of climate change.

But the news is not all bad. One success story among many that we have had here is the introduction of the humble Irish potato to drought-stricken and hungry areas of the highlands of Ethiopia. In an attempt to find a substitute for local varieties, we introduced the Belete variety which produced extremely high yields of 56.6 tonnes per hectare. Potato production has already expanded beyond the areas where we work, and farmers in nearby highland zones are now spontaneously adopting potatoes to replace or complement barley.

The Ethiopian government, by supporting this programme and by adopting a Climate Resilient Green Economy strategy to ensure that economic growth can be achieved with low emissions, is a beacon of hope in the climate debate.

If poor countries such as Ethiopia have the courage to adopt bold policies in the face of huge challenges then surely countries like Ireland should lend their support to Ethiopia in Paris?

The Ethiopian message is clear: poor countries have suffered many of the negative impacts of world economic growth, including climate change. Rich industrialised countries, including Ireland, have a moral imperative to mitigate this.

Meanwhile the lives and livelihoods of millions of people in Ethiopia hang in the balance.