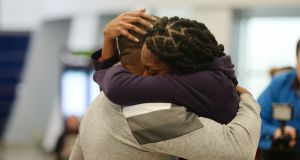 Alain Luma embraces Fabienne Gay on her return from Canada at Dublin Airport for Christmas in 2019. Photograph: Alan Betson / The Irish Times

The Government has agreed a new strategy for engaging a “broad and inclusive” Irish diaspora and embracing the need “to heal relationships” with emigrants who left Ireland in crisis.

The plan identifies Irish who left because of discrimination or as victims of institutional abuse.

It aims to shed the stereotypical view of the diaspora and reflect the diversity of contemporary Irish communities abroad connected to Ireland through “citizenship, heritage and affinity.”

The strategy document, entitled Ireland’s Diaspora Strategy 2020-2025, is published today as part of the Global Ireland programme at the Department of Foreign Affairs.

The plan aims to engage a “contemporary diaspora” that includes Irish citizens living overseas, both those born in Ireland and those born abroad to Irish families, as well as the millions of people of Irish descent around the world who are part of the “heritage diaspora.”

The Government hopes to appeal to the “reverse diaspora” – people who have lived, studied or worked in Ireland before returning to their home countries – and the “affinity diaspora”, which it defines as people who hold a deep appreciation for Irish people, places and culture.

The last government’s commitment to hold a referendum on giving voting rights to Irish citizens living outside the State in presidential elections is restated in this Government’s plan.

Minister for Foreign Affairs Simon Coveney said that the intention to hold the referendum on voting in presidential ballots from 2025 “underlines the importance attached by the Government to making the Presidency an office which truly represents all the citizens of Ireland”.

Plans to hold a referendum stalled amid concerns around Brexit last year and due to the general election earlier this year, but legislation scheduling the vote remains before the Oireachtas.

Taoiseach Micheál Martin has said that central to the new diaspora strategy was “a deep appreciation of the profound importance of connection”.

The impact of the Covid-19 pandemic had placed a “renewed emphasis” on the diaspora’s relationship and links to Ireland, he said.

The Government said that the strategy reflects its commitment to legal migration to the US and solutions for “undocumented Irish citizens,” to promote opportunities by the next generation of the diaspora to work and study in Ireland, and to address barriers facing returning emigrants.

The strategy aims to increase contacts with traditionally under-represented groups such as Irish Travellers and Irish of mixed heritage, and to support the LGBT+ people in the diaspora.

Noreen Bowden, co-founder of VotingRights.ie, a group pushing for voting rights for the diaspora, said that it was “heartening” to see a recommitment to the referendum.

“It seems more important than ever now - as we all confront the tremendous challenges associated today with Brexit, the pandemic, and even democracy itself that we work on strengthening our relationship with and commitment to each other as citizens,” she said.

Allowing Irish citizens abroad to vote for President would “strengthen the bond between Ireland and the Irish abroad” and would “encourage an even stronger sense of belonging and civic responsibility among the diaspora.”

“It would also further reinforce the importance of the presidency for every Irish person, on the island of Ireland and abroad,” said Ms Bowden, who is based in the US.

The new strategy was “an exciting step” and the referendum “could play a pivotal role in ensuring that the relationship between Ireland and the Irish abroad keeps on growing and deepening.”

The Government has said the strategy covers a commitment to ensure “that the most vulnerable of our overseas communities are supported.” The plan says the Government will support measures and organisations that “protect the dignity and wellbeing of Irish emigrants.”

Britain is home to large numbers of survivors of institutional abuse in Ireland. Almost 40 per cent of people who gave evidence to the Commission to Inquire into Child Abuse lived in Britain.

Brendan Fay, a long-time US resident and champion of equal rights for the Irish LBGT community in New York, said it was a “very profound” and “long overdue” acknowledgement to recognise members of the diaspora who were “forced to flee” Ireland because of discrimination or crisis.

He said there was “a generation who fled Ireland and are scattered across the world because of their experience of discrimination they lived with every day and found suffocating.”

Mr Fay praised the Government for embracing “the more painful stories, the scars that people left with and the wounds of emigration” where, in the past, political leaders often only looked to the diaspora to celebrate the most successful stories of Irish emigration.

“Maybe Government leaders, in acknowledging this, are touching something and going deeper and rethinking the diaspora that, besides celebrating the contributions from the Irish abroad, are acknowledging the wounds and the scars that people take with them,” he said.

Ireland was only beginning to recognise the stories of women who fled Ireland after spending their lives in institutions, said Mr Fay. He pointed to the “silence” around other experiences of the Irish abroad, including those “who were shipped to America as babies.”

“Maybe this is the beginning of a significant moment in Irish history of acknowledging the diaspora who were forced to flee, who did not choose, and are always left with this angst and longing for home,” he said.

“It is a loss for Ireland. I have often said to people that I had to leave to come home.”